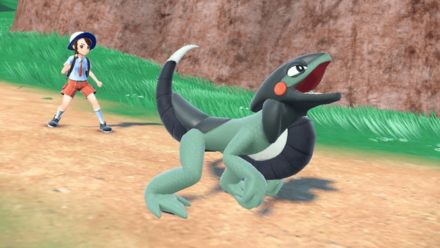 New Pokemon announcements are some of the most exciting reveals to look forward to whenever a new generation comes around. Check out all the new Pokemon confirmed for Gen 9 in Pokemon Scarlet and Violet.

Klawf, A Pokemon with a New Ability

Yet one more crab Pokemon has appeared in the form of Klawf! With its new Anger Shell ability, when its HP drops to half or less, its Defense and Sp. Def stats are lowered, but its Attack, Sp. Atk, and Speed stats are raised.

On August 30th, a new Pokemon, Grafaiai, was confirmed via an official tweet, and on September 1st, its form and typing was finally revealed. The first-ever Poison/Normal-type Pokemon in the series, Grafaiai is based on the aye-aye, a lemur native to Madagascar.

Cyclizar: A Koraidon and Miraidon Pre-Evolution?

On August 21st, a new Pokemon, Cyclizar was announced at the ending ceremony of the 2022 Pokemon World Championships.

Based on its similar appearance in having a wheel on its chest, it seems likely that Cyclizar will act as a pre-evolution for Koraidon and Miraidon, and choose which it evolves into based on the game version.

Cyclizar: Everything We Know

Regional Variants have been confirmed to return to Pokemon Scarlet and Violet with a new Poison/Ground-type Wooper making his appearance!

The Fairy-type Fidough, and the Ice-type Cetitan are two of the newest revealed Pokemon for Pokemon Scarlet and Violet!

In addition, three other new Pokemon have been shown: The Electric-type Pawmi, the Normal-type Lechonk, and the Grass/Normal-type Smoliv.

The three Starter Pokemon, Sprigatito, Fuecoco, and Quaxly were the first Pokemon announced for the game in the Announcement Trailer.

Starter Pokemon: Everything We Know

In order for us to make the best articles possible, share your corrections, opinions, and thoughts about 「New Pokemon: All New Generation 9 Pokemon | Pokemon Scarlet and Violet」 with us!