List of World Quests and How to Accept | Genshin Impact 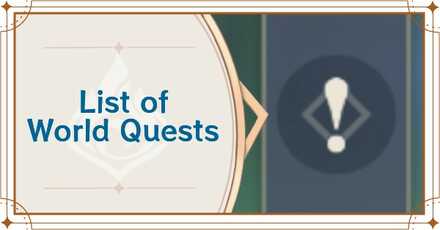 This is a guide to World Quests in Genshin Impact. In this article we'll be going over the benefits to completing World Quests, how to find them, and have a list with their rewards!

How to Accept World Quests

Speak to a Specific NPC

World Quests can be found while exploring Teyvat and talking to NPCs. These NPCs don't appear any differently from regular NPCs so if you meet anyone out in the field you should try speaking to them!

Be the Necessary Adventure Rank 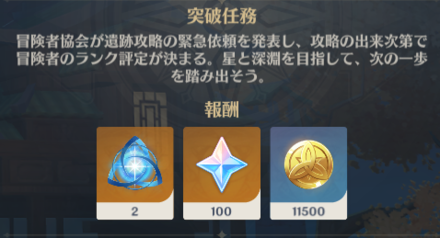 Some World Quests can only be unlocked once you reach a certain Adventure Rank.

Certain quests will even raise your max Adventure Rank and your World Level once you complete them, these are called Ascension Quests.

How to Raise Your World Level

Go to the Required Area

There are some World Quests that will begin just by being in the right area. These quests cannot be triggered at will, so if one shows up while you're around you should prioritize completing it.

Just like Archon and Story Quests, World Quests will provide a variety of rewards for completing. These rewards can range from Adventure Experience to Primogems so you should do as many as you can.

Some World Quests will not only give you the typical rewards, but they can also increase your World Level by 1.

World Quest in Each Region

※We will add to this list as we find out more!

See more comments (13 Comments)
Opinions about an article or post go here.
Opinions about an article or post
We at Game8 thank you for your support.
In order for us to make the best articles possible, share your corrections, opinions, and thoughts about "List of World Quests and How to Accept" with us!
When reporting a problem, please be as specific as possible in providing details such as what conditions the problem occurred under and what kind of effects it had.