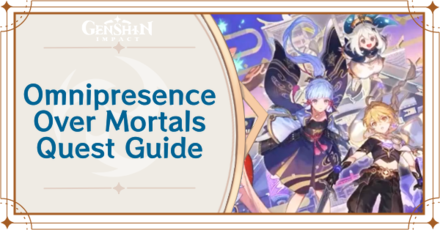 Omnipresence Over Mortals is the Archon Quest for Chapter 2: Act 3 of Genshin Impact. Learn how to unlock this quest and where it is found, how to beat the Anti-Raiden Shogun Training, Delusion Factory domain, quest rewards, and other information in this guide!

How to Unlock Chapter 2: Act 3

How to Beat the Final Challenge

As soon as you start the challenge, dash to the edge of the barrier. The best way to avoid all of the attacks is by constantly walking around the edge. When you see the training mechanism opening up, quickly press the dash button!

Try deploying two Anemo Characters to activate your Anemo Resonance and give you a Movement Speed Bonus and decreased Stamina Consumption. Using the taller characters to run around faster will also help!

Avoid Being Hit by the Finishing Move 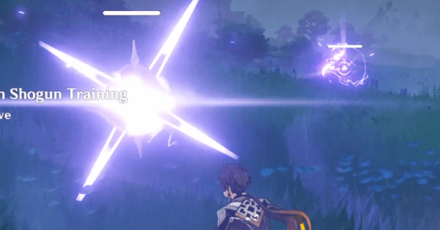 Once you've successfully avoided the initial attacks, Electro Crystals will form all around you. You have run towards an Electro Crystal and quickly destroy it to fully complete the Final Challenge. 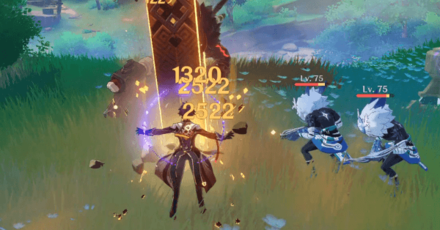 In the second phase, you'll need to defeat enemies while dodging the occasional Electro attacks. The easiest way to get through this is by dashing a lot, bringing Anemo characters for crowd control, and bringing Shield characters for protection.

Omnipresence Over Mortals Walkthrough and Rewards

At Sangonomiya Kokomi's invitation, you decided to visit Sangonomoya Shrine, the headquarters of the resistance army.

Those Who Yearn For the Gods' Gaze

You take up the post of leader of Swordfish II. Unexpectedly, Teppei has also received a promotion...

Those Who Yearn For the Gods' Gaze Objectives

The secret weapon and last restort of the resistance is, in fact, Delusions. Teppei's death ignites and unquenchable flame of rage within you...

Blinded by fury, you fall into a trap laid by Scaramouche. But as you are about to black out, you catch a glimps of Yae Miko's form...

You hurry to find proof of your claims to Kujou Sara that the Kujou Clan has betrayed the Shogunate within three days.

The evidence of the Tenryou Commission's treason is in your hands. How will Kujou Sara's viewpoint change?

Duel Before the Throne

Kujou Sara storms towards the Tenshukaku in a fury. Realizing that this is your chance to meet the Raiden Shogun again, but an unexpected familiar figure greets you before the throne...

Duel Before the Throne Objectives

Before the Raiden Shogun's martial might, you sense that initiating Yae Miko's plan may not be as easy as you thought. It might be best to leave Tenshukaku and make further plans from there...

You did not betray the wishes that had attached themselves to you - the Vision Hunt Decree has been abolished by the Raiden Shogun. The turbulent waves have calmed for now. Time to go see Yae Miko.

Before going inside the domain, we recommend bringing a strong, well-rounded party, as the fleet of Fatui enemies can overwhelm you!

A mix of Cryo, Pyro, and Hydro can take care of the Fatui shields, and having an Anemo character can swirl those elements for you!

Your main objective inside the Delusion Factory is to collect all Three Electro Amulets inside various rooms. They will be resting on a lit altar, and you'll simply need to pick them up!

Once you get all of them, approach the big door in the Main Room and be prepared to fight the Fatui!

In order for us to make the best articles possible, share your corrections, opinions, and thoughts about 「Chapter 2: Act 3 Story Walkthrough | Omnipresence Over Mortals Archon Quest Walkthrough and Rewards | Genshin Impact」 with us!