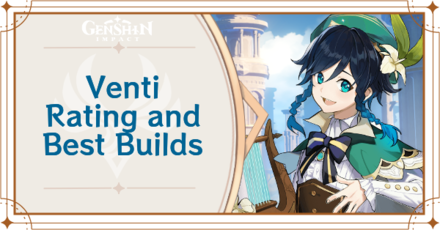 This sub-DPS build for Venti focuses on stacking as much Elemental Mastery as possible for his Elemental Absorption damage. EM Mainstats on the Viridescent Venered are tough to get, but this build offers the best damage against multiple enemies. You will need around +180% Energy Recharge, depending on how much you use his Elemental Skill.

This Crit sub-DPS build for Venti has more of a cookie-cutter build for his Artifact Mainstats. These Mainstats are much better against single target enemies, especially if there is no Elemental Absorption involved. Like the other build, you will also need +180% Energy Recharge.

This support build for Venti is only focused on grouping enemies together and always having your Elemental Burst ready. It may not give you the most damage, but it will be the most consistent for Crowd Control. Since Venti is usually a solo Anemo user in this role, he will need around +200% Energy Recharge, which can be flexible depending on your team comp.

Venti's Elemental Burst is a defining tool for dealing damage and utility, and should be prioritized accordingly. His Elemental Skill also deals high damage, and leveling it up can be valuable. His Normal Attack will be barely used, so it can be ignored or saved for last.

All Recommended Weapons for Venti

Venti is a character that can be slotted into any team comp that requires Crowd Control or who wants to reduce the Elemental Resistance of enemies. Team comps below are just a few examples.

Venti is a staple for different Freeze comps thanks to his ability to Absorp and Swirl Cryo while enemies are applied with Hydro. Different iterations of this build has Ganyu as Main DPS or Shenhe as a replacement for Diona.

This Electro-Charged team comp for venti focuses on grouping enemies together to make a concoction of multiple proccing Elemental Reactions. Make sure to swirl Hydro first in this team comp!

Constellations for Venti mostly increase his own DPS until C6. If crowd control and Elemental Absorption are all you need, then leaving him at C0 is perfectly viable.

How to Use Venti

Skyward Sonnet Is Great for Exploration and Dodging

Venti's Elemental Skill, Skyward Sonnet, can be used to create air currents for exploration. Players in search of treasure chests and oculi can take advantage of this skill to reach high places that would otherwise be difficult to reach.

It can also be used to dodge enemies while also gathering them together. You can plunge down on them to deal extra damage!

Venti's Passive Talent, Windrider, reduces the gliding stamina consumption of all party members by 20%. This allows for easy gliding throughout Teyvat, especially in mountainous Liyue.

The Passive Talent, Stormeye, regenerates 15 Energy for Venti and an additional 15 Energy to the character whose element gets absorbed by Venti's Elemental Burst.

Venti shines best against mobs like the Treasure Hoarders, the Fatui, Nobushi, and Hilichurls. He can use Skyward Sonnet or Wind's Grand Ode to gather them together in a single area!

How to Get Venti

Pull from Ballad in Goblets

There is currently no way to get Venti from active Wish Banners. His last rerun banner, the Ballad in Goblets, went live from September 28, 2022 to October 14, 2022, alongside Cyno's debut banner, the Twilight Arbiter.

The featured 4-star characters on both Cyno and Venti's banners were Candace, Sayu, and Kuki Shinobu! 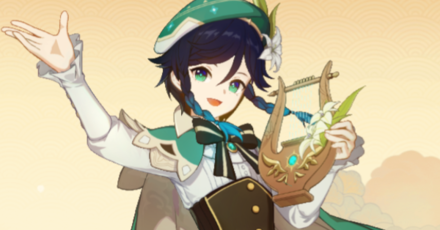 Venti, known by many as a wandering bard in Mondstadt is the Anemo Archon of Genshin Impact. His real name is Barbatos but he uses Venti as his alias to live a carefree and wine-filled life.

Venti's Thoughts About Others

In order for us to make the best articles possible, share your corrections, opinions, and thoughts about 「Venti Rating and Best Builds | Genshin Impact」 with us!