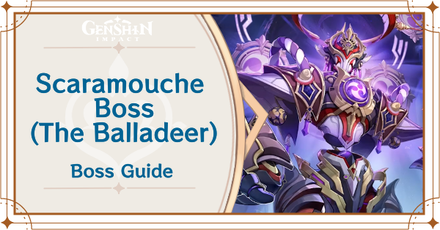 Scaramouche (also known as the Balladeer or Shouki no Kami) is a weekly boss in Genshin Impact. See where to find and how to unlock the boss domain, Scaramouche's elemental weaknesses, best team and characters, how to defeat it, achievements, and material drops here! 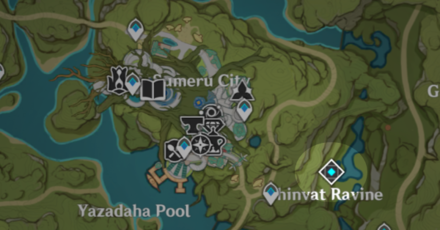 The Scaramouche Boss Fight domain is located in Chinvat Ravine, Sumeru in the Avidya Forest area.

How to Unlock Scaramouche Boss Fight

Complete Where the Boat of Consciousness Lies

Scaramouche can be unlocked as a weekly boss fight after completing the Where the Boat of Consciousness Lies quest during Archon Quest Chapter III: Act V.

During the second phase, Scaramouche can launch an attack that summons multiple elemental bombs that will eventually explode. Use the element each bomb is weak against to destroy it quickly and collect an Energy Block.

Scaramouche's Nirvana Engines in the second phase are resistant to the Electro and Hydro elements. Use Pyro, Cryo, or Dendro Elemental Attacks to fill up the Neo Akasha Terminal and avoid the one hit knockout move: Setsuna Shoumetsu.

Use Ranged Elemental Characters in the party

We recommend using characters who can use ranged elemental attacks. Ganyu is an excellent option as her Charged Attacks can deal tons of single target DMG from a distance.

Nahida can easily attack the obstacles that provide Energy Blocks while Bennett and Zhongli can protect you from taking huge hits.

All the Best Characters to Fight Scaramouche

How to Defeat Scaramouche 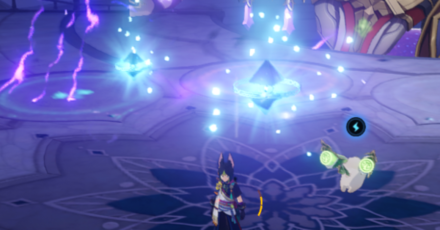 To defeat Scaramouche, you must collect Energy Blocks generated from his attacks to charge up the Neo Akasha Terminal.

The Neo Akasha Terminal is a device used during battle to immobilize or deal DMG to Shouki no Kami.

Use the Elemental Matrix on the First Phase 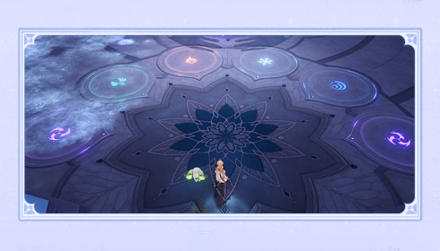 During the first phase, there will be circular pads on the floor you can step on called Elemental Matrices. Fully charge the Neo Akasha Terminal and use it on the pads to generate the following effects:

Deplete the Shield on the Second Phase

Using a fully charged Neo Akasha Terminal during the second phase will replace your Elemental Skill with a powerful attack that can deal a huge chunk of DMG.

Hold the Skill and aim it on the enemy to unleash a green blast. 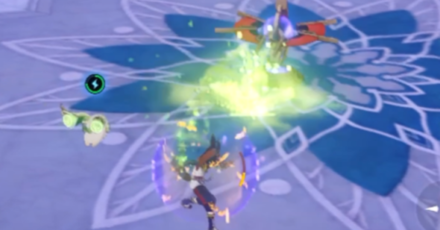 When Scaramouche's shield in the second phase has been destroyed, attack the Nirvana Engines using Pyro, Cryo, and Dendro to charge up the Akasha Terminal. Once charged up, use it to unleash a blast that can immobilize Shouki no Kami.

Failure to do so will have one of your party members killed by the Setsuna Shoumetsu attack.

It All Comes Tumbling Down

To unlock this achievement, you must activate the Electro Elemental Matrices to immobilize the mech on the first phase of the boss fight.

Causality of Birth and Extinction

This achievement can be attained by having your active character party killed by the Setsuna Shoumetsu after destroying Scaramouche's shield on the second phase.

The Shouki no Kami weekly boss was showcased alongside the Dendro Hypostasis and was released in Version 3.2 on November 2, 2022.

In order for us to make the best articles possible, share your corrections, opinions, and thoughts about 「Scaramouche Boss Fight Location and How to Defeat Guide | Shouki no Kami | Genshin Impact」 with us!