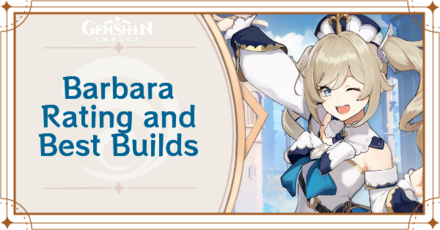 A Barbara build focused on creating Dendro Cores through her Normal Attacks will require her to use the Gilded Dreams Artifact Set with Elemental Mastery Mainstats.

This build works especially well for Fridge teams (Barbara, 2 Dendro's, 1 off-field Cryo Damage Dealer) or a Free to Play team for Nilou as a replacement for Kokomi.

This Barbara build allows you to deal DMG while healing at the same time through using the bubble from the Ocean-Hued Clam set. The Bubble can easily deal maximum DMG when Barbara uses her Elemental Burst.

This Barbara build specializes in pure healing, which makes your party have no trouble in surviving even the hardest content in the game.

Only level up her Normal Attacks if you are using her as a Main DPS.

All Recommended Weapons for Barbara

This Baraba Dendro Core team has her act as a substitute for Kokomi if they don't have her for Nilou's ideal team comp.

Reviving a teammate in Spiral Abyss is an extremely rare character ability. Just remember that you will need to wait 15 minutes while inside the chamber to reset the cooldown.

How to Use Barbara

If Barbara is the active character, her Normal and Charged Attacks will heal all party members (Charged Attacks give more potent healing than Normal Attacks).

If Barbara is switched out, then the active character is passively healed for every five seconds during the duration of the Skill.

Be careful around Elemental Enemies

Take care when using Barbara's Elemental Skill as it applies Wet to enemies and the active character and may trigger unwanted Elemental Reactions to yourself such as Frozen or Electro-Charged.

Barbara's Elemental Burst, Shining Miracle, is a strong burst that massively heals the HP of your entire party. This skill scales with Barbara's Max HP.

This is a great emergency heal, and it's best to always have it ready before taking on difficult challenges.

Despite being locked behind her 6th Constellation, the auto revive potential alone makes Barbara decent to bring for challenging high level Spiral Abyss or Weekly Bosses.

Barbara and Qiqi are the only characters who can revive fallen party members. They both unlock this feature at C6.

Barbara shares the same cooking ability as Jean and grants a 12% chance of doubling the cooking product when cooking a dish perfectly. This should be taken advantage of as much as possible when cooking high rarity healing dishes.

With My Whole Heart

How to Get Barbara

Pull from Nilou and Albedo's Banners in Version 3.1 Phase 2

Get Barbara as a featured 4-star in Albedo's rerun banner and Nilou's debut banner for Version 3.1! Their banners are active from October 14, 2022 to November 2, 2022.

Other featured 4-stars are Beidou and Xiangling!

Barbara is available at a normal rate on all Standard Wish Banners except Beginner's Wish. This means you can get her from Wanderlust Invocation, Epitome Invocation. and the current Character Wish banners.

As a 4-star character, Barbara has a chance to appear in the Starglitter Exchange every month. She can be traded for 34 Masterless Starglitter.

Free Barbara from Baptism of Song

You can get Barbara for free after completing the Archon Quest ''A Long Shot,'' and reaching Adventure Rank 18.

How to Get Barbara's Character Skin

Barbara's character skin was temporarily available for free during Version 1.6 from the Echoing Tales Event after getting 24 Echoing Conches. Currently, Barbara's Outfit costs 1680 Genesis Crystals in the Shop.

Barbara's Thoughts About Others

In order for us to make the best articles possible, share your corrections, opinions, and thoughts about 「Barbara Rating and Best Builds | Genshin Impact」 with us!