How to Farm and Spend Mora (Money) | Genshin Impact 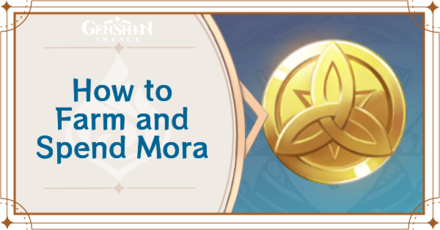 Mora is the main currency in Genshin Impact. Find out all ways to get Mora, the best ways to farm Mora, and what to spend it on here! 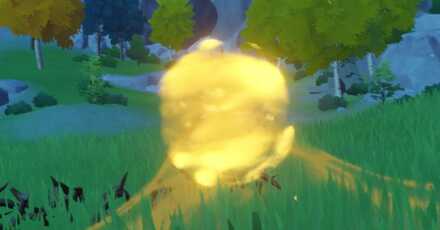 You can complete a Ley Line Blossom challenge and collect rewards by using Original Resin, or get double the amount of rewards using Condensed Resin. This is the most straightforward way of earning Mora within the game. 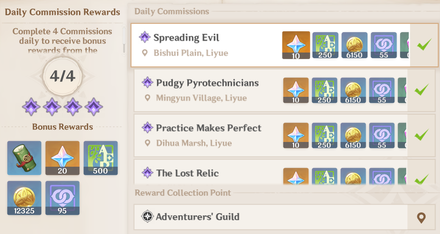 Every day you'll get a new set of four Daily Commissions that will give you Mora as one of the rewards for completion. Clearing all 4 of these can net you about 20,000 Mora a day! 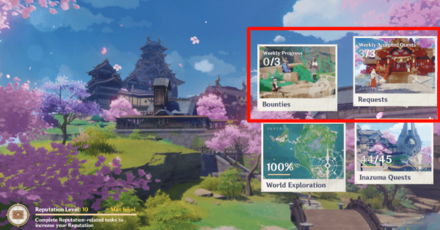 Every week, you can complete three Reputation Requests and three Bounties for any of the available regions. Even after reaching the maximum Reputation level, you can still continue to complete these quests in order to collect BP Experience Points and Mora rewards! 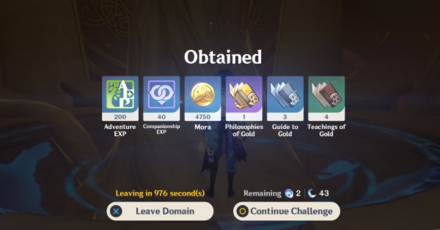 Upon clearing any Challenge Domain, you'll receive Mora as one of the rewards. Depending on the difficulty of the Domain, the amount of Mora you get will differ. You will also get double the usual amount of rewards when using Condensed Resin as opposed to Original Resin.

However, it's better to clear Challenge Domains based on the Talent Level-Up Material, Weapon Enhancement Material, or Artifact that you need, instead of based on how much Mora you can get.

Other Ways to Get Mora 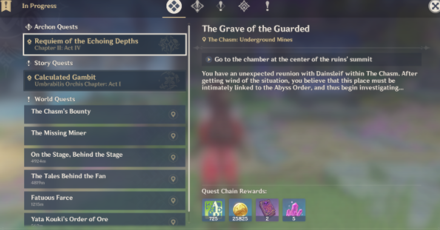 Teyvat is full of different types of quests that can reward Mora upon completion. Archon Quests, Character Story Quests, and World Quests all have different amounts of Mora rewards depending on the quest. 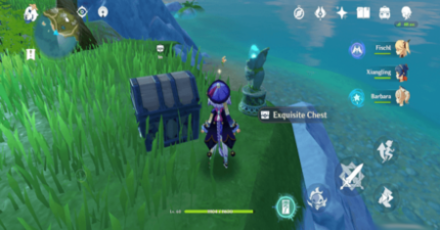 You can find various types of Treasure Chests in the open world of Genshin Impact. Depending on your Adventure Rank, World Level, and the Treasure Chest Type, you can get different amounts of Mora by opening and collecting these chests! 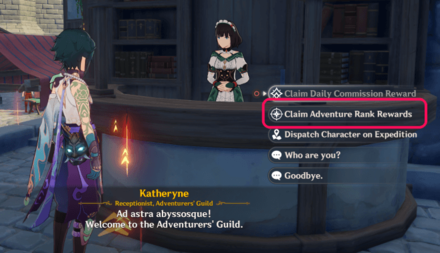 Every time you achieve a certain Adventure Rank, you will receive Mora as one of the rewards. Don't forget to stop by the Adventurer's Guild to claim your reward for ranking up! 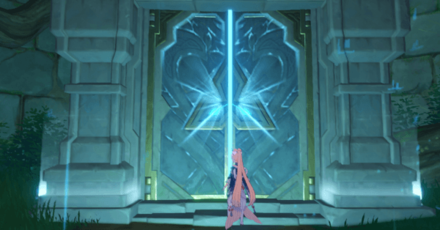 One-Time Domains also give generous amounts of Mora as part of their rewards. However, they are a type of domain that you can collect rewards from only once. Challenging the domain again will not give you any more rewards. 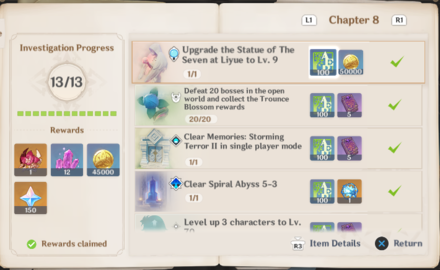 The Adventurer's Handbook has several Investigation Chapters that you can complete achievements in to get various rewards, including Mora! 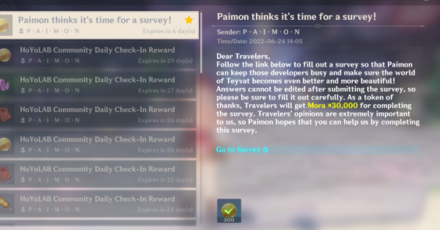 Every now and then, Genshin Impact will send a survey to the players' in-game mail. This often happens soon after an event is completed or near the end of a patch, so that players can give feedback about the latest game content.

Simply completing the survey can give you up to 30,000 Mora as a reward! 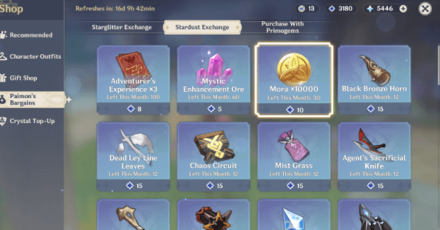 Stardust obtained from Wishes can be exchanged for Mora. This is split into a limit of 30 times a month exchange as well as an unlimited exchange with the difference being the amount of Stardust required.

However, both will give you 10,000 Mora per exchange, so if you find yourself low on money but high on Stardust, you can use this method.

Stardust and What to Trade it For 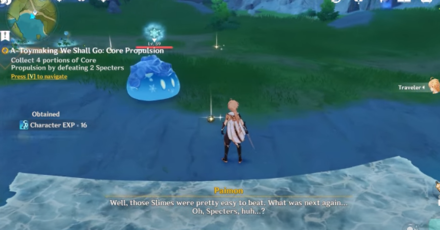 The amount of Mora monsters drop is dependent on their level

You can get a bit of Mora for killing monsters out in the field, though we highly suggest opting for the other methods instead of farming enemies for Mora.

All Ways to Use Mora

How to Use Mora

Mora is used in nearly every part of the game, from leveling up characters to crafting new items and weapons. 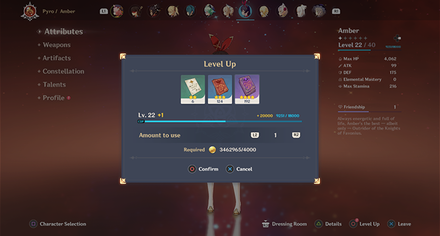 One of the main ways to use Mora is to level up your characters! Raising a character from Level 1 to the maximum Level 90 requires over two million Mora, so it's best to save up first or raise a character's levels slowly. 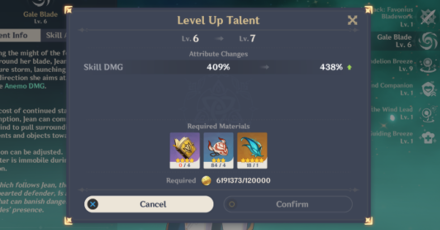 After ascending a character to their maximum level, you can pay attention to their Talent levels! Each character has three talents that you can level up using Mora and Talent Level-Up Materials.

Leveling a single Talent from Level 1 to Level 10 costs 1,652,500 Mora and a lot of other Talent Level-Up Materials, so you have to prioritize which Talents your character needs the most!

How to Level Up Talents 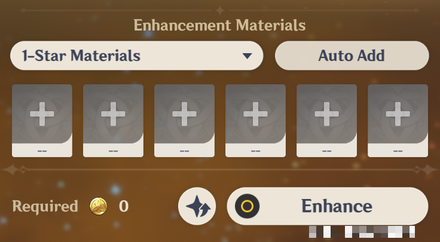 Mora is also required to level up and refine weapons! Once you've decided which weapon your character is going to use, it's best to level them up quickly.

Even if you decide to switch to a different weapon in the future, the weapon you've already raised can still be used on other characters, so there will be no losses!

Best Weapons of All Types

We suggest leveling up Artifacts once you've leveled up your characters' talents and weapon first, since the stats from leveling up artifacts will depend entirely on luck. Getting the Artifact stats you desire can cost a lot of mora!

Craft and Forge Items and Weapons

Buy From the NPC Shops 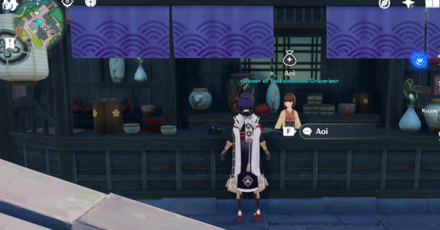 There are many NPCs found in each region that offer items for players to buy! Players can buy Weapons, Artifacts, Recipes, Cooking Ingredients, Books, Gadgets or Furnishing Blueprints depending on which shop you go to.

Common currency. The one language everybody speaks

In order for us to make the best articles possible, share your corrections, opinions, and thoughts about 「How to Farm and Spend Mora (Money) | Genshin Impact」 with us!