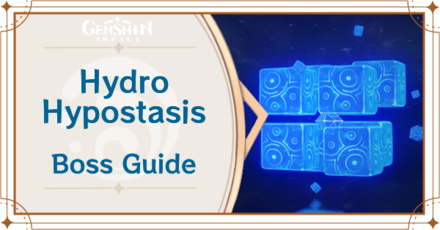 The Hydro Hypostasis is located in an underground cavern in the Watatsumi Island area in Inazuma!

The Hydro Hypostasis' weakness is its core. We recommend bringing Ranged characters as your main DPS to deal damage as soon as its core is vulnerable.

Are you missing specific characters, or have you not built a full party yet? Teaming up with others from our Co-Op boards is a great way to quickly beat the Hydro Hypostasis and other bosses!

How to Beat the Hydro Hypostasis

Attack it during its resting state 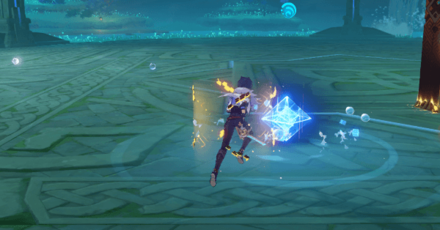 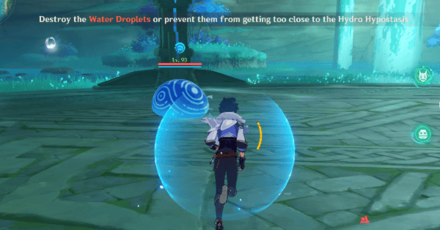 Use Cryo to destroy the water droplets

Using Cryo attacks from Cryo Characters is the fastest way to destroy these water droplets.

The Hydro Hypostasis gathers water around its body, forms a giant bubble, then unleashes a Hydro explosion. After the attack, it splits out into several cubes.

The Hydro Hypostasis summons Dolphins in a circle around it, which constantly leap up into the air then back into the ground.

The Hydro Hypostasis summons three Dolphins that leap up into the air then crash into the ground. Hydro DMG will likely be dealt to the landing's AoE.

The Hydro Hypostasis forms into tail fins, then smacks the ground. This sends water explosions out in a straight line.

The Hydro Hypostasis summons Hydro blocks that dive into the ground, hitting a small AoE with a wave-like attack.

The Hydro Hypostasis surrounds itself with rolling Hydro cubes, then unleashes a wave of Hydro in the area arround it.

The Hydro Hypostasis will twist around like a tornado and summon three showers of Hydro that follow the player.

Characters that Use Hydro Hypostasis Materials

Use Geo Traveler's Elemental Skill and Burst to block the slimes from approaching the center to get The Fraught Return achivement.

One of your characters need to be hit by a Dolphin attack.
Achievement List and Rewards

In order for us to make the best articles possible, share your corrections, opinions, and thoughts about 「Hydro Hypostasis Boss Guide | Genshin Impact」 with us!