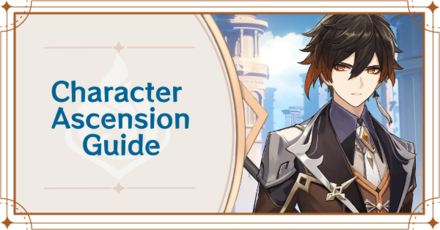 This is a guide to Character Ascension, or going past the max level, in Genshin Impact. Learn how to level up your character, and the bonuses obtained from Ascending.

What is Character Ascension?

Ascension is a feature which allows a Character to go past their initial level cap, as well as providing additional bonuses in itself.

How to Level Up

When you obtain the same character multiple times from Wish rolls, you will obtain materials needed to unlock a Character's Constellations. These items are unrelated to Ascension, so you will not be able to unlock Constellations through Character Ascension. You'll need to roll a lot of Wishes if you want to open up all of these!

Ascending a Character requires unique Materials obtained in Abyssal Domains and from enemy and boss item drops It's also required to raise your Adventure Rank first before Ascending to the next level.

How to Ascend Your Character

How to Get Ascension Materials

Since Adventure Rank will go up as you complete Quests and continue playing the game, collecting Materials is the only real hurdle for Ascension.

You can take a look at the required Ascension materials for the next phase using the Ascension Preview.

This preview prevents you from getting lost on which items to find, and focus on the materials that one character needs. This is important, especially when getting materials from Boss enemies and searching for local specialties.

Here are the Ascension Material requirements per phase:

Ascension Cost from 1 to 20

In order to break past the level cap on each character, Ascension is a necessary aspect of play. To proceed through the story, Ascension becomes necessary as enemies grow more powerful, so keep Ascension in mind as you play and collect the listed Ascension Materials for your characters whenever you have the opportunity.

Strengthens Your Characters for the Next World Level

Each World Level increase means that enemies and bosses become stronger. This makes the game more challenging, requiring you to ascend more characters as you play. Make sure you ascend your characters around 5-10 levels higher than enemies. This makes sure that you can handle most fights with ease.

Not only is Ascension necessary for breaking the level cap, but it also raises the Character's base stats and unlocks a new Talent for them.

Each character has a specific stat that increases at each Ascension Rank past Rank 2. This can include stats like CRIT Rate, CRIT Damage, Elemental Mastery, and different kinds of Damage Bonuses.

In order for us to make the best articles possible, share your corrections, opinions, and thoughts about 「Character Ascension | How to Ascend | Genshin Impact」 with us!