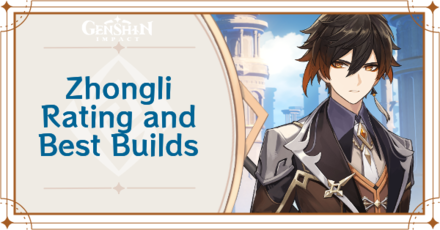 Sub-DPS and Support Builds for Zhongli

This Sub-DPS build is focused on dealing as much damage as possible from his Elemental Skill. Your shields won't be as strong, but that won't matter if you beat your enemies faster.

This Sub-DPS build enhances Zhongli's Burst Damage while also providing buffs to the team. It does a little less compared to the Geo Sub-DPS build but will offer stronger shields.

This support build for Zhongli focuses on providing very strong shields for the party. Though not the best damage, it offers the most comfortable playstyle by letting you never worry about losing shields.

The strength of Zhongli comes from his Elemental Skill which creates a Pillar that deals constant damage and a Shield that both protects you and debuffs the enemy. At higher levels, his Elemental Burst can deal a lot of damage but doesn't compare to how useful his Elemental SKill is.

All Recommended Weapons for Zhongli

Zhongli is an overall amazing support character. He can be fitted as the flex role in any team comp that needs a shielder and universal debuffer for all elements.

Mono-Geo teams usually require only three Geo characters and a flex role with a different element to create the Crystalize effect. With Zhongli in the party, not only will he provide shields, but also reduce the DMG resistance of enemies against the Geo Element.

Zhongli creates a unique mechanic when his Pillar interacts with other Geo Constructs, in which the pulsing effect will spread across all constructs. The effect of this on the Geo Traveler's Elemental Skill and Burst can cover a wide area that deals a lot of damage!

Since Physical damage is considered as an Element, Zhongli's shield will also reduce the Physical Resistance of enemies. A big issue with Eula is how open she is to attacks during her combos, but not anymore when Zhongli is on the team. This can apply to any Phys DMG team comp.

Other than his C3 and C5 which increases his damage, unlocking C1 unlocks the most of his potential. Lucky and light spenders can leave him in this constellation and get the most out of his toolkit.

How to Use Zhongli

Zhongli, when used as a Support, can use his Hold Elemental Skill to create a shield that can withstand most enemy attacks. 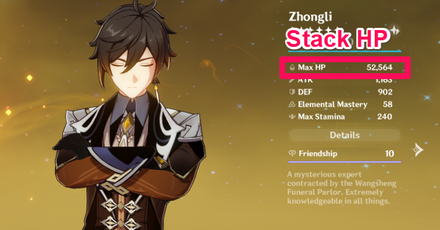 To maximize his shield potential, it is recommended to stack HP% on artifacts. The more HP you have, the sturdier your shield will become!

Not Effective Against Corrosion 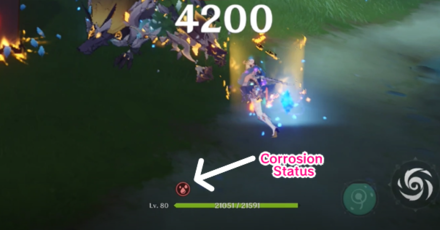 Note that Corrosion will go through shields, making your HP bleed when fighting against enemies like Rifthounds.

Zhongli's Elemental Burst, Planet Befall, summons a meteor that crashes into the battlefield, petrifying all enemies in its impact zone. This gives you a chance to set up other elemental reactions or heal your team.

Pressing Zhongli's Elemental Skill summons a Stone Stele that pulsates and deals AoE Geo Damage. The Stone Stele will also cause all nearby Geo Constructs to pulse Geo damage.

The Stone Stele is considered a Geo Construct which can be climbed, as well as block attacks for defensive uses.

Geo Characters that Can Resonate

Geo characters who can create Geo Constructs can only resonate with Zhongli's Stone Stele, so if you want to maximize damage as a Sub-DPS, make sure to bring at least one of them for resonance!

Take Out Geo Constructs and Shields

Zhongli's hold ability also absorbs a chunk of Geo shields or constructs. This skill is perfect for fighting Rock Shieldwall Mitachurls or Large Geo Slimes to take out their shields.

How to Get Zhongli

Get from Zhongli's 3.0 Rerun Banner

Zhongli, also known as Morax, is the Geo Archon of Genshin Impact. He uses Zhongli as his pseudonym to experience the world from a mortal's perspective. He is currently acting as a consultant for the Wangsheng Funeral Parlor.

See more comments (146 Comments)
Opinions about an article or post

In order for us to make the best articles possible, share your corrections, opinions, and thoughts about 「Zhongli Rating and Best Builds | Genshin Impact」 with us!