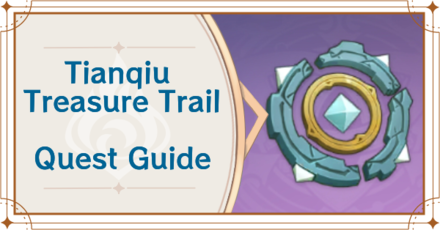 Tianqiu Treasure Trail is a World Quest in Genshin Impact. Learn how to unlock this Quest and where it is found, as well as its rewards and a full walkthrough for completing the Quest.

This quest is available after the Version 1.3 Update released on February 3, 2021.

To begin the quest, you will need to talk to Lan at the Liyue Harbor Adventurer's Guild.

Lan of the Liyue Harbor Adventurer's Guild seems to be troubled by something...

It is recommended you have one Cryo and one Pyro character in your party for this quest as you will encounter a handful of enemies.

You will be facing off against Hilichurls, Hydro Slimes, and Fatui Skirmishers to get some of the treasure, so make sure you are ready for them.

After completing the quest, you will receive a new gadget, the Parametric Transformer. You can use it once every seven days to transmute a set of items into something different.

How to Use Parametric Transformer

Fatui Skirmishers can be found patrolling the area near the second treasure chest while a group of Hydro Slimes will appear when you dig for the third treasure chest.

Register as a member and get all the information you want. (It's free!)
Login
Opinions about an article or post go here.
Opinions about an article or post
We at Game8 thank you for your support.
In order for us to make the best articles possible, share your corrections, opinions, and thoughts about "Tianqiu Treasure Trail World Quest Walkthrough and Rewards | Parametric Transformer Quest Reward" with us!
When reporting a problem, please be as specific as possible in providing details such as what conditions the problem occurred under and what kind of effects it had.