The Chasm Map Guide and How to Unlock | Genshin Impact 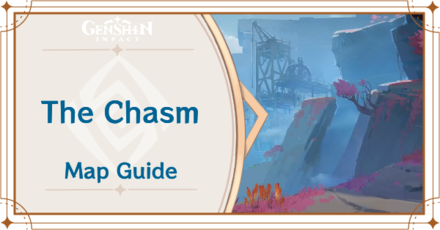 The Chasm is a new area in Genshin Impact's Liyue region that was released in Version 2.6. See a map of the Chasm and its areas, instructions on how to unlock all of The Chasm, quests found in The Chasm, features and puzzles in The Chasm, enemies and wildlife in The Chasm, and The Chasm's lore here!

The Chasm Maps and Areas

Maps of The Chasm's Surface and Underground Mines

You can click on the map images to enlarge them!

The Chasm area has two maps because it's divided into The Surface and The Undergound Mines. Both areas are available as of The Chasm's release on March 30, 2022.

How to Unlock The Chasm

The official way to unlock The Chasm and all of its areas is by playing through all of the quests in The Chasm Delvers quest chain. Go to the Adventurer's Guild booth in Liyue and talk to Lan to begin the quest.

You can sneak past the Millelith and enter the Surface without doing the quest chain, but you will need to finish at least ''Surreptitious Seven-Star Seal Sundering to explore the Underground Mines.

All Quests in The Chasm

The Chasm Quests and How to Unlock

Quest Chains in The Chasm

Standalone Quests in The Chasm

Features and Puzzles in The Chasm

Enemies and Wildlife in The Chasm

Enemies in The Chasm

Wildlife in The Chasm

Items Found in The Chasm

Artifacts in The Chasm

Gadgets and Materials in The Chasm

More Information on The Chasm

What is The Chasm? 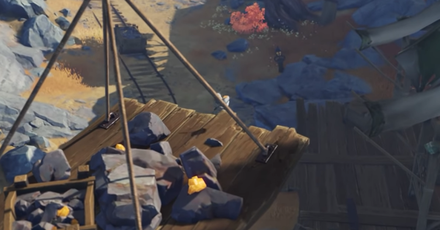 The Chasm used to be one of Liyue's primary sources of ores, but mysterious circumstances have caused it to close down.

The road leading to the Chasm, between Lingju Pass and Qingxu Pool, had become overrun with Hilichurl camps and Pyro Abyss Mages. 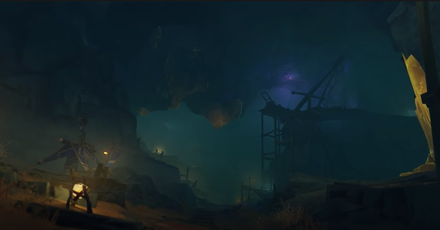 The pathways of the Chasm's underground mines are intricate and complex, and are treacherous to navigate thanks to recent developments. The mines are not only rich in minerals, but the special environmental conditions have given rise to unique fluorescent plants. 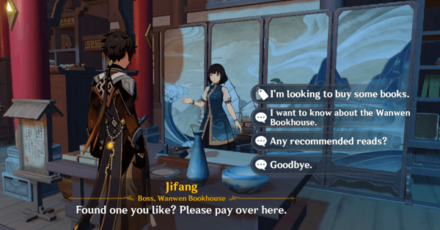 The novel called the Records of Jueyun Vol. 6: Hidden Jade is about the Dunyu Ruins, but it talks in part about the origin of the Chasm. You can buy the book at Wanwen Bookhouse in Liyue Harbor!

Created from a Falling Star 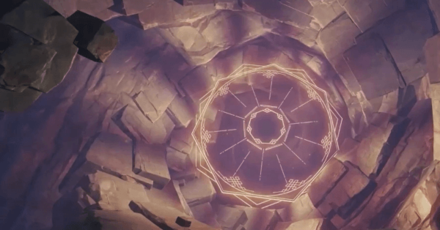 According to the book, thousands of years before the Archon War, when even Rex Lapis was still a young god, a star fell from the sky and transformed barren plains into a huge and deep chasm full of beautiful jade.

A fragment of this star would also land north of Lisha and the area would eventually become the Dunyu Ruins.

Rich in Ores and Crystals 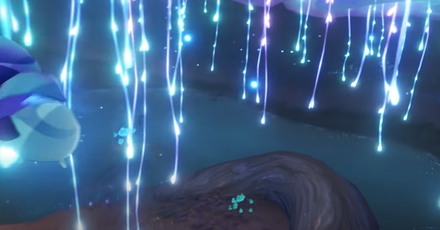 Because of special, geological conditions, the soil and vegetation in this area have a distinctive color.


In the valley northwest of Liyue Harbor and south of Nantianmen lie many silent, ancient ruins.
One of these areas is known as the Dunyu Ruins. This area is said to have already existed even before the time of the Archon Wars.
According to old legends passed by word of mouth, Dunyu means the land to which beauteous jade flees.
In a past beyond memory, when even Rex Lapis would still have been young, a star fell from the sky into the barren plains west of Liyue. These plains were transformed into a huge and deep chasm in the wake of that star's descent, and jade would emerge from within, beautiful and limitless, and it would become the foundation for a thousand years of industrial mining in Liyue thereafter. Legend has it that when that nameless star fell, a fragment of it broke off and crashed into the rocks in northern Lisha.
As most know, wordless stones harbored soul and spirit, and in manners and times not witnessed by mortal eyes they watched and listened to the ley lines' pulses, the echoes of the alpine springs, and the slow but inexorable movements of the mountains.

But unlike the ordinary but enduring stone of the earth, the fragments of the meteorite that fell from heaven had a proud and agitated temper.
Later, when countless gods and rulers fought over the appointed celestial seats, and the very stars and abyss themselves faded, tragedy and evil embarred the breath of the waters and mountains. The fallen star could bear this no longer, and heedless of the great chasm's persuasions to stay it leaped away, away towards the heavens.nl]
As it returned to the skies, the heavenly jade left behind a deep pit, within which humans would build great cities and mighty fortresses, finding refuge and shutting themselves in with the leftover inheritance of that fallen star.
Over the tumult and storms of the next few thousand years, the redoubts of the Dunyu Valley stood tall and maintained prosperous relations with Liyue Harbor up till 500 years ago. But with the coming of the black calamity and the rise of the Abyss, the residents of Dunyu sealed the ancient city and departed for other lands. None know why these refugees chose to shut the gates of their home, and even the millennia-old adepti and yaksha are silent on this matter.
And so, the sealed fortresses became giant, silent tombs, with naught left in them but the sound of pond water and the wind whistling through empty halls and thusly, too, did they come to be called the Dunyu Ruins by the people of Liyue.

A Place of Battles 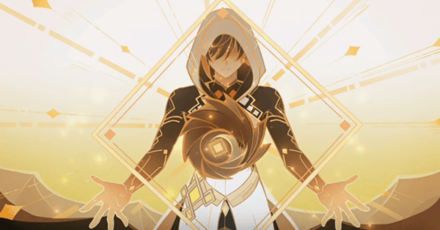 The Millelith and the Nameless Yaksha 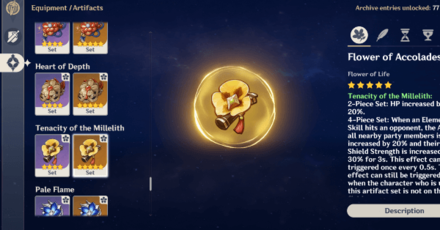 The Archive description of the Tenacity of the Milellith Artifact set details a different battle that occured in the Chasm. The battle happened between the Abyss, and the combined forces of the Millelith and the nameless yaksha, who defended the Chasm under Rex Lapis' orders.

Present Situation in The Chasm

Sealed Off by the Qixing

The Ministry of Civil Affairs in Liyue put up an announcement at the Noticeboard in front of their establishment announcing that the Chasm mines had been closed due to an accident.

They offered temporary unemployment, medical, and food stipends to the affected workers. Shops affected by the closue of the mines were also given tax exemptions and deductions.

Talking to Shizhuang the Strong near the south of Lingju Pass will reveal that the Qixing sealed the mines after Shizhuang's team had dug up ''something very strange.'' Shizhuang said that everyone who had seen the ''very strange'' thing had fallen into a coma, and he had not seen the thing himself. 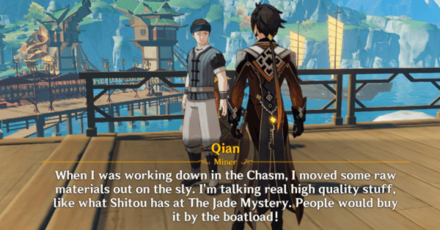 You can find the NPC Qian walking around near the southern Teleport Waypoint in Liyue Harbor. He is one of the miners who lost their jobs after the Chasm was closed off.

Climate Conditions in The Chasm

Esther, a researcher in Dragonspine, mentioned that the Chasm's weather conditions differs from the rest of Liyue, like the conditions of Dragonspine and Mondstadt. According to this, it's highly likely that the Chasm will have some unique environmental properties as well!

Esther can be found near the Teleport Waypoint north of Wyrmrest Valley.

In order for us to make the best articles possible, share your corrections, opinions, and thoughts about 「The Chasm Map Guide and How to Unlock | Genshin Impact」 with us!