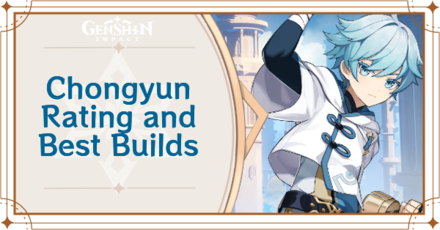 This Main DPS cookie-cutter build for Chongyun can work for any team comp where he's primarily on-field. Gladiator's Finale can be replaced with any +18% ATK artifact such as the Shimenawa's or Echoes of An Offering.

This Sub-DPS build for Chongyun will mostly use his Elemental Skill and Burst off-cooldown. A Sacrificial Greatsword works very well with Chongyun since using his skill again will trigger his second passive (Steady Breathing) early, decreasing the enemy's cryo resistance.

Just like the Sub-DPS build, this Support build for Chongyun uses his Elemental Skill and Burst to help the party. However, it trades DMG from the Emblem of Severed Fate with a party-wide buff from the Nobless set instead.

All Recommended Weapons for Chongyun

This Main DPS build for Chongyun can be good for both single target and multiple enemies. Adding an Anemo character to debuff enemies by using the Viridescent Venerer set and to group enemes will be ideal.

Zhongli could be placed in the support slot, just keep his pillar away from the fight to prevent it from stealing shatters.

This is a throwback to the Original ''National Team'' back in the early days of Genshin. Until now, it's still a very good budget team that deals its damage primarily through Elemental Reactions.

This Melt team for Chongyun puts him in either the Sub-DPS or Support role. It focuses on triggering a Melt Elemental Reaction to do big DMG. Chongyun's Elemental Skill at C2 works very well with Bennett's, making his Elemental Skill have a very short cooldown.

Chongyun's 2nd Constellation provides a very unique and strong buff that shortens the cooldown of any Elemental Skill or Burst that's used while his Elemental Skill is in effect. For what he lacks in DMG, he makes up in utility!

How to Use Chongyun

Chongyun's Elemental Skill, Spirit Blade: Chonghua's Layered Frost, spawns a circular area where all melee attacks made by your active character are converted into Cryo.

This is great for setting up Melt and Frozen reactions with Pyro characters, or for simply boosting Chongyun's damage.

Does Not Synergize with Physical Characters 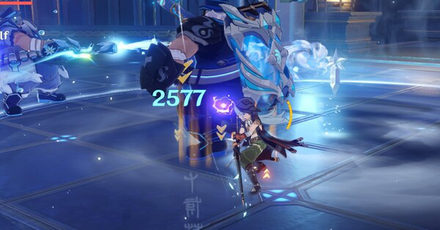 Because Chongyun's Elemental Skill converts Physical damage to Cryo damage, it is not synergistic with characters that deal primarily physical damage such as Razor, Keqing, and Eula.

In addition, triggering Superconduct with Chongyun's Elemental Skill will not be as useful, as characters under his circle cannot deal Physical damage anyways. 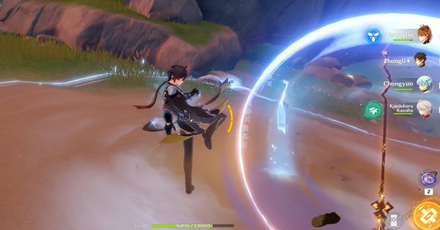 Chongyun's Ascension Passive, Steady Breathing, increases the Normal ATK Speed of characters by 8% within his field.

This is a great tool for fast and consistent Cryo attacks, or for trying out interesting builds with non-Cryo characters! 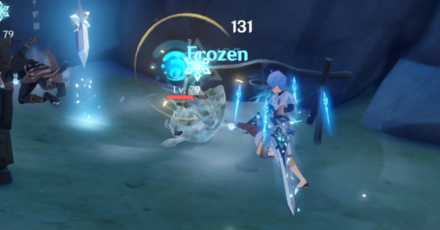 As Chongyun can freeze enemies, he can also Shatter them as a claymore user. Shatter breaks frozen enemies but will deal an extra instance of Physical damage.

When paired with Xingqiu, you can consistently freeze enemies then deal more damage as you shatter them with Chongyun!

Can Freeze Water to Walk Across

Chongyun is not only able to freeze the surface of water with his Elemental Skill, but the skill also enables him to continue freezing with Normal and Charged Attacks, making him a good choice when crossing bodies of water.

How to Get Chongyun

Chongyun is available at a normal rate on all Standard Wish Banners except Beginner's Wish. This means you can get him from Wanderlust Invocation, Epitome Invocation, and the current Character Event Wishes.

As a 4-star character, Chongyun has a chance to appear in the Starglitter Exchange every month for 34 Masterless Starglitter. As of now, Chongyun hasn't appeared yet in this shop.

In order for us to make the best articles possible, share your corrections, opinions, and thoughts about 「Chongyun Rating and Best Builds | Genshin Impact」 with us!