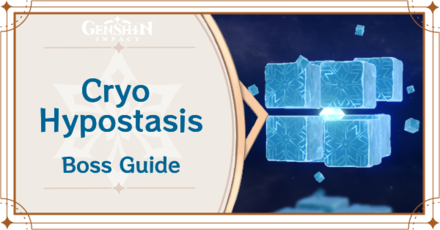 The Cryo Hypostasis is a boss enemy in Genshin Impact. It's Dragonspine's version of the Hypostasis enemies. 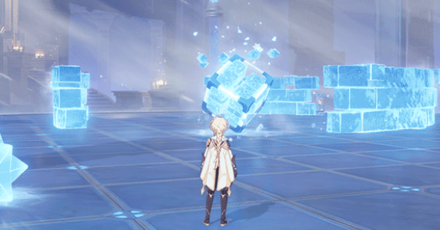 The Cryo Hypostasis is a featured boss in the Hypostatic Symphony: Dissonant Verse event.

Sonata of the Snowy Path Guide 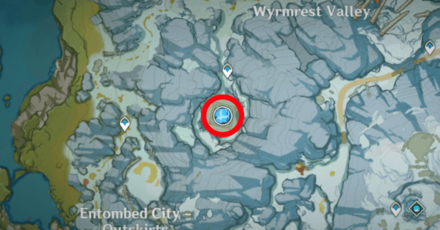 The Cryo Hypostasis is located in the western area of Dragonspine, in the middle of Wyrmrest Valley and Entombed City Outskirts

How to Unlock the Cryo Hypostasis 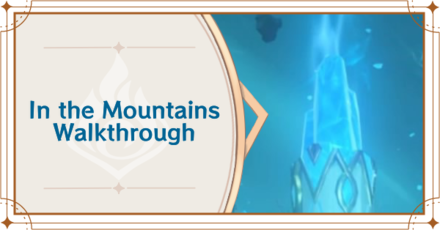 How to Beat Cryo Hypostasis

Wait for an Opening to Attack 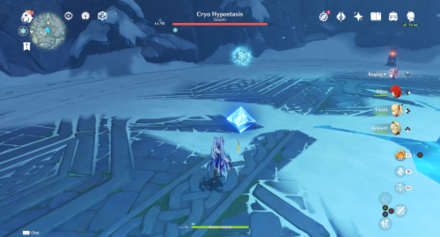 The Cryo Hypostasis' weakness is its core, which is vulnerable after every attack. Use Pyro and Electro skills to deal massive damage quickly.

Hit the Frostfruits to Break the Cryo Shield

After breaking the Cryo Shield, you can now deal damage and finish it off. You can also use Charged Bow Attacks on the Frostfruits to keep yourself at a safe distance while breaking the shield. 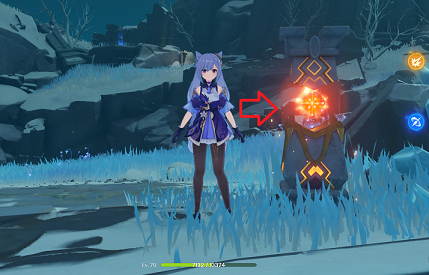 Apart from fighting the Cryo Hypostass, you also need to manage Sheer Cold throughout the fight. Make sure you get near heat sources during the fight, as damage from the cold combined with the Hypostasis attacks can knock out your party.

The following are the best recommended characters to use for the Cryo Hypostasis.

When building your party, it is recommended to choose either 1 DPS, 2 Sub-DPS and 1 Support or 1 DPS, 1 Sub-DPS and 2 Support, depending on which of your characters are the strongest.

Attacking the Cryo Hypostasis using Pyro characters allows you to deal Melt, which deals massive damage. You can also use Amber to deal damage at range, preventing you from getting attacked.

The Cryo Hypostasis has a wide variety of fast and accurate projectile attacks that deal high DMG. This is why it's important to bring one character that can generate shields, like Noelle.

Pryo Resonance gives your party a 25% ATK boost, which helps you deal more overall DMG. This makes bringing two Pyro Characters in your party an effective way to beat the Cryo Hypostasis easily.

The Cryo Hypostasis can launch a variety of high DMG projectile attacks. To prevent taking any damage, using characters like Zhongli and Xinyan will protect you throughout.

Similar to other Hypostases, the Cryo Hypostasis has its own version of the Clap Attack. Avoid the attack to be able to deal damage on the vulnerable Hypostasis Core.

The Cryo Hypostasis launches a ring of icicles in the surrounding area. This has a wide range, so keep your distance when it attacks.

Another attack that's similar to other Hypostases, the Cryo Hypostasis also has a Cryo Barrage Attack, which can attack you from a distance. Keep moving around to avoid the shards.

The Cryo Hypostasis creates a series of spikes around it, trapping and stunning players on hit. Be wary of the marks that appear on the ground, as these are places the spikes will pop out of.

The Cryo Hypostasis forms a spiked ice wheel that will rapidly charge and deal damage to anyone in its path. Keep your distance and avoid the wheel to prevent taking huge damage.

Characters That Use Cryo Hypostasis Materials

Characters That Use Crystalline Bloom

Characters That Use Shivada Jade

In order for us to make the best articles possible, share your corrections, opinions, and thoughts about 「Cryo Hypostasis Location and Boss Fight Guide | Genshin Impact」 with us!