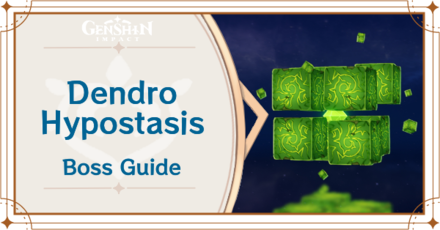 The Dendro Hypostasis, located in the Sumeru Desert region, is a Field Boss in Genshin Impact 3.2. Check its location out how to get to it, its weaknesses, the best team and characters to use, and how to beat it here! 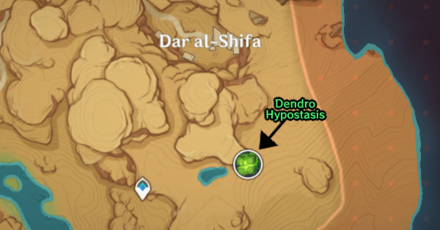 The Dendro Hypostasis is inside a cave south of Dar al-Shifa of the Sumeru Desert region. You don't need to complete any quest to unlock it.

How to Get to the Dendro Hypostasis

It is still important to bring a Dendro character to activate Restorative Piths in its second phase.

We recommend using a character like Yoimiya or any other Pyro DPS as they can deal Burning DMG to the Hypostasis and can counter certain attacks with Pyro.

Dendro and Electro characters are also needed to activate Restorative Piths which will finish off the Dendro Hypostasis. Bow characters like Fischl and Collei can use Aimed Shots to activate Piths a lot faster.

All the Best Characters to Fight Dendro Hypostasis

Can you Beat the Dendro Hypostasis Without Dendro?

While extremely tedious, it is possible to beat the Dendro Hypostasis without using a Dendro character. You can do so by using a Hydro character to trigger Bloom reactions and use Dendro Cores to activate the Restorative Piths.

Characters like Kazuha or Sucrose help in bringing the Dendro Cores closer to the Piths.

How to Beat the Dendro Hypostasis

How to Defeat the Dendro Hypostasis

Weaknesses are Electro and Pyro 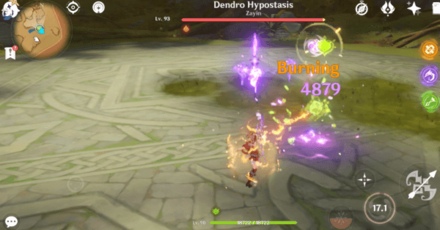 The Dendro Hypostasis is weak to Electro and Pyro, as the amplifying powers of Aggravate and Burning is easy to achieve with its semi-permanent Dendro status. You can also combine Burning with Electro to inflict Overloaded to deal even more damage to its core!

Hit the Piths with Dendro and Electro 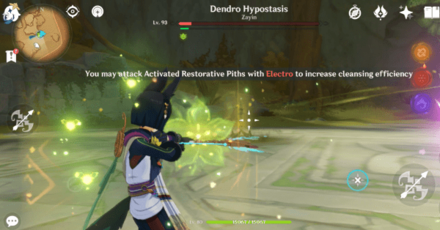 Once you've depleted the Dendro Hypostasis' HP, it will release three Restorative Piths. Initially, these piths are inactive but it follows the properties of the Tri-Lakshana Creatures.

You need to ''cleanse'' them with Dendro then speed up the cleansing process with Electro! 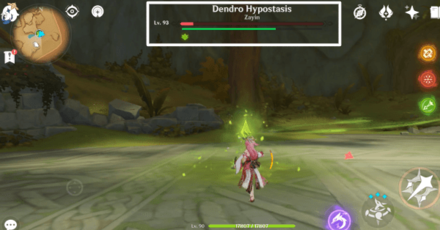 After you hit any of the piths with Dendro a meter will appear below the boss' HP. This indicates the rate at which the cleansing progresses. You need to hit all three piths with a Dendro Attack and hit at least two piths with an Electro attack!

The Dendro Hypostasis will curl into a circular structure, then spew masses of Dendro within a certain AoE. You can avoid this by dodging out of the way once it starts curling into a ball.

It will then enter a cooldown where you can dish out damage on it for a short period of time!

The boss will gather its shell around it to create a whip to strike at your character! Dodge its attacks as the whip falls on the ground, or simply distance yourself from it within the arena.

After this attack, it will also enter a short cooldown where you can damage it!

The Dendro Hypostasis will restructure its shell into a ball to strike the ground three times and explode once it lands a third time. You can avoid this by looking out for the green indicator on the ground, which will mark where it will land!

You can use Pyro to destroy the ball form right away and be able to deal damage to the Dendro Hypostasis a lot sooner!

The boss will create three vines on the ground to strike in your area. It will leave the core vulnerable, so you only need to dodge the vines then strike the core!

The Dendro Hypostasis will release large AoE vines that will cover the entire arena, then close in the vines until it reaches the center to explode. There are two ways to deal with this, either avoid this or attack the core but risk getting caught up in the explosion at the end!

To escape successfully, watch out for when the boss will go back to the center then release a thin green circle. This indicates the start of the AoE Vine Cage!

Characters that Use Quelled Creeper

Records of the Fall

This achievement requires you to attack the Dendro Hypostasis using the Pyro element when it turns into a ball and does a Plunging Attack.

The Marvelous Uses of Nitrogen Fixation

This achievement requires the use of an Electro character. Apply the Electro element to all three Restorative Piths after activating them using Dendro!
Achievement List & Rewards

The Dendro Hypostasis was first introduced in the 3.2 livestream and was officially released when Version 3.2 went live on November 2, 2022!

The Dendro Hypostasis is a featured boss in the Hypostatic Symphony: Dissonant Verse event.

The Dendro Hypostasis' attacks are pretty much the same for the most part, the difference is that the Restorative Piths are out from the beginning of the challenge and they have an AoE arena around them.

Depending on the state of these piths, it can slowly decrease your characters HP in the scorched state, heal you in it's normal state, and buff you in it's activated state! See the full guide here:

Rondo of the Forest Corral Guide

In order for us to make the best articles possible, share your corrections, opinions, and thoughts about 「How to Get to the Dendro Hypostasis' Location and How to Beat It | Genshin Impact」 with us!