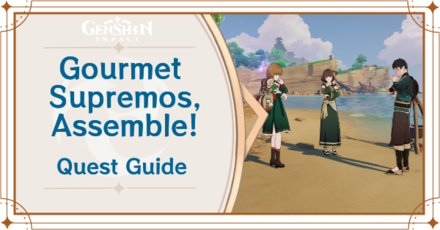 Gourmet Supremos, Assemble! is a World Quest in Genshin Impact. Learn how to unlock this Quest and where it is found, as well as its rewards and a full walkthrough for completing the Quest.

You run into a group that calls themselves the Gourmet Supremos on the outskirts of Inazuma. They want to collect some Sakura Blooms, but a strange barrier is keeping them out. According to one of them, Parvaneh, you need to first find and touch something called a Thunder Sakura Bough in order to get through the barrier...

You will also receive a recipe to cook Sakura Tempura after completing the Quest.

For this quest, we recommend bringing an Electro character beforehand to get the Special Sakura Bloom, as you need to use Electro on the Sakura Petals you can manage to claim the item.

Register as a member and get all the information you want. (It's free!)
Login
Opinions about an article or post go here.
Opinions about an article or post
We at Game8 thank you for your support.
In order for us to make the best articles possible, share your corrections, opinions, and thoughts about "Gourmet Supremos, Assemble! World Quest Walkthrough and Rewards" with us!
When reporting a problem, please be as specific as possible in providing details such as what conditions the problem occurred under and what kind of effects it had.