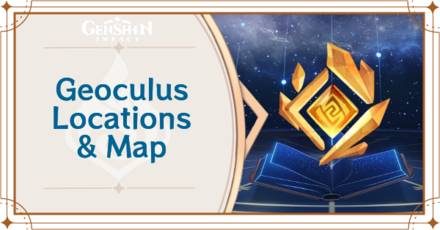 A Geoculus is used to upgrade Liyue Statues of the Seven in Genshin Impact. Use our interactive map to find all Geoculus Locations, detailed walkthroughs with pictures on how to get each Geoculus, and other information here!

Map of Geoculus in Bishui Plain 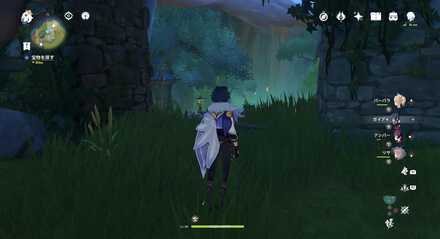 The Geoculus is located in the deepest part of the ruins, but it can only be accessed after clearing the The Chi of Guyun World Quest.

The Chi of Guyun Quest Guide

2. Hidden inside the cave above a Ruin Guard

4. Inside a small cave near the pond with the waterfalls

35. Use Anemo Skill on the Windmill to reach the Geoculus

You can find a little windmill on top of the hill, which you can use your Anemo skill on to activate a wind current, which you can then use to glide up to a Geoculus.

Map of Geoculus in Qiongji Estuary

5. Use the Anemo Skill on the windmill to activate a wind current and ride it

Near the cliff you can find a windmill that you have to use the Anemo Skill on to activate the wind current. Once activated, just ride the current up and you'll get the the Geoculus.

18. Blow up the rocks to reveal the entrance underground and defeat the Ruin Guard

20. Use Anemo Skill on the windmill to activate a wind current to fly you to the Geoculus

You will need to use the Anemo skill to activate a windmill. Once activated, a wind current will appear that you can float on to reach the Geoculus.

Map of Geoculus in Minlin 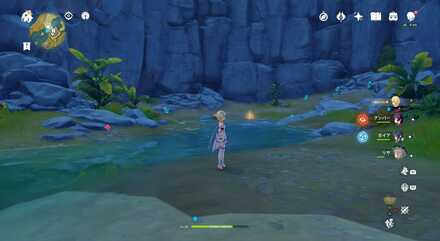 Use the nearby waypoint and go down the cliff. There are lots of items to mine here too.

10. Align 3 Crane Statues to create an Upward Wind Current and fly to the Floating Island 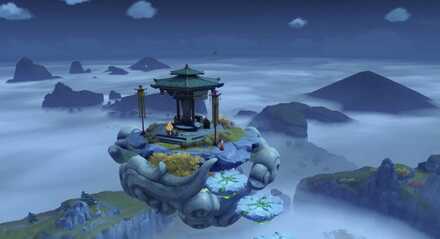 This puzzle involves aligning 3 statues to gain access to a floating island above Qingyun Peak. 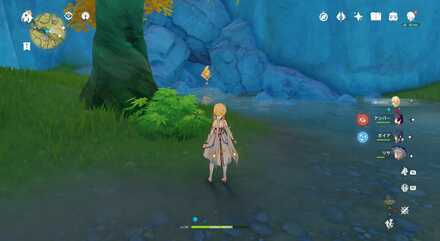 The Geoculus can be found in between two rocks. It's hard to see from the air, which is why going down to ground level is the best option.

22. Activate 2 switches to drain the water 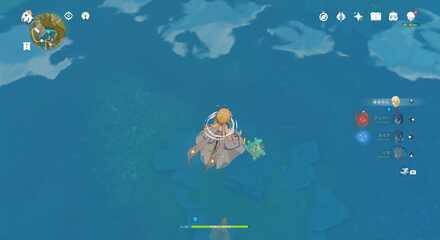 The water level drops by defeating all the monsters and activating the 2 switch devices.

Map of Geoculus in the Sea of Clouds

1. Between the mountains near the Statue of the Seven

You can find the Geoculus nearby by climbing the mountain near the Statue of the Seven.

2. Climb the roof of the building under the stone mountain arch

When heading to Liyue Harbor, you'll pass by a large mountain arch. There you can find a building wherein if you climb up to its roof you can get the Geoculus. 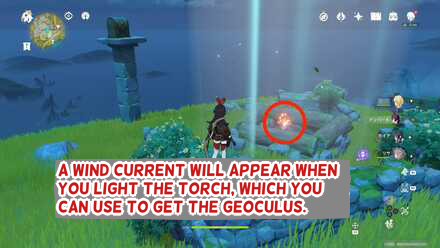 There is an elemental monument where you need to use a Pyro skill to ignite it and generate an upward wind current. Characters like Amber will be useful here.

4. Use an Anemo skill on the windmill plant 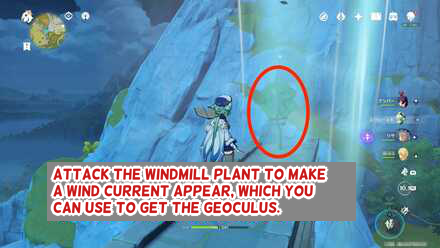 These windmill plants require an Anemo Elemental SKill to activate. The Anemo Traveler's Elemental Skill can be used here to generate an upward wind current.

5. Use a Geo element skill on the Geo monument 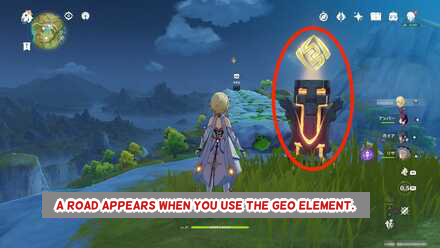 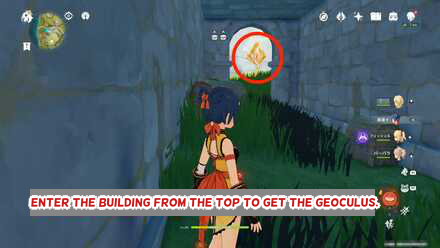 You can enter the ruins in the Sea of Clouds from its top floor. There are a number of Hilichurls in the area, so bring a character that can handle mobs easily. 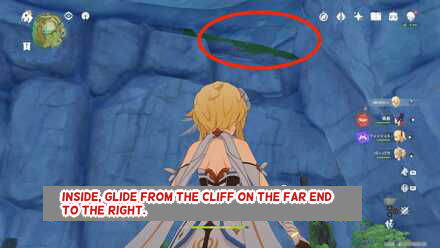 Look for the horizontal opening on the side of Mt. Tianheng, these will have a pack of Hilichurls outside. Once inside, look for the rock with a green ledge. 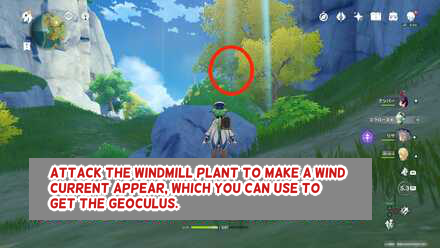 Similar to #4, you can use an Anemo Elemental Skill on the windmill plant to generate an upward wind current. 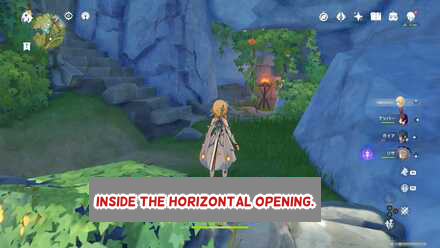 There is a cave where you can enter from the side. This entrance is located just next to the stone steps.

10. Under the foot of the statue 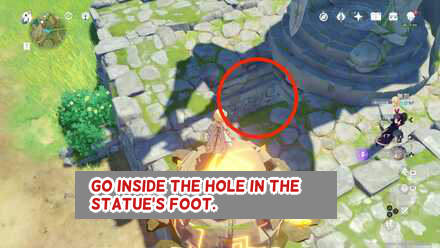 There is a hole under the foot of this statue. The grassy overgrowth may make it hard to spot but clearing the plants will reveal a hole containing the Geoculus.

The Geoculus is just on top of a broken branch which you can climb.

Map of Geoculus in Lisha 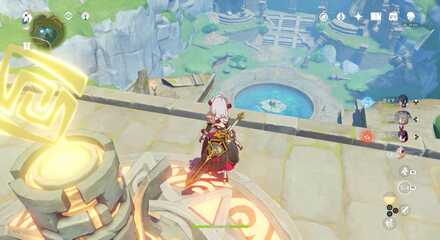 The Geoculus in the area is surrounded by a wind barrier and is underwater.

To drain the pond, use a Pyro attack or Elemental Skill to light the four flame monuments and then activate a Geo monument. 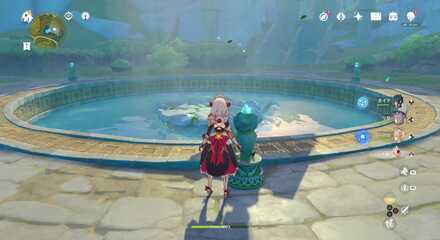 After the water has been drained, you'll need to find 3 Seelies and follow them to their nest.

Two are found inside the ruins with the Geo monuments, and one is found in the ruins next to the huge stone structure.

How to Use Geoculus

Upgrade Statue of the Seven

Geoculus is used to level up the Statues of the Seven in Liyue to increase your stamina and claim rewards.

There are 130 total Geoculus to find and collect.

After collecting all the Geoculi and leveling up the Statues of the Seven in Liyue, there would be 1 Geoculus left in your inventory. There are no known uses yet for the extra Geoculus.

How to Level Up Statues of the Seven

If you're finding it hard to explore the terrains of Liyue, bring a friend or two to help you! Check out our friend request and co-op boards for potential exploration buddies: 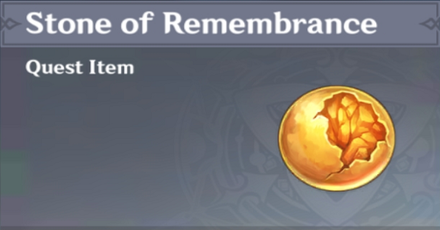 Each time you level up the Statue of the Seven, you will be awarded with a Stone of Remembrance used for the Nine Pillars of Peace quest.

There are 9 Stone of Remembrance to collect. Completing the quest will reward you with a 5-star artifact.

How to Find Missing Geoculus 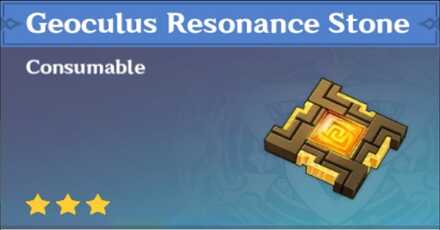 The 1.1 Update has since added a new item that will help you find any Geoculus you're still missing.

How to Unlock Geoculus Resonance Stone 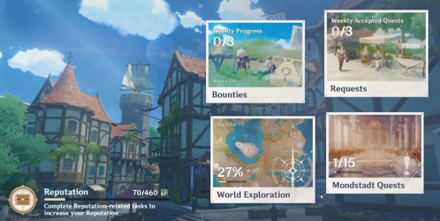 You can unlock the blueprint for Geoculus Resonance Stone by reaching City Reputation Level 2 in Liyue.

How to Craft Geoculus Resonance Stone

In order to craft the Geoculus Resonance Stone you need the following materials.

The Cor Lapis and Glaze Lily are local specialty items that you can only find in Liyue.

How to Use Geoculus Resonance Stone 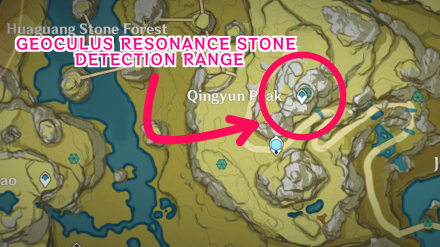 Once you have the item crafted, go to your inventory to equip and use it.

It will then pull up the map and show you an approximate area where you can find a random Geoculus you haven't found yet.

Note that Resonance Stone Gadgets are consumables, you'd need to create another one after using it!

See more comments (23 Comments)
Opinions about an article or post

In order for us to make the best articles possible, share your corrections, opinions, and thoughts about 「Geoculus Locations and Interactive Map | Genshin Impact」 with us!