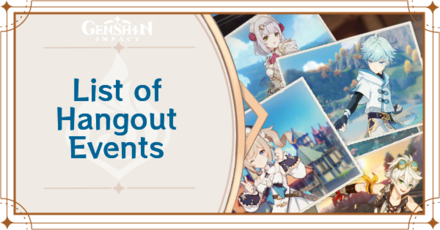 Hangout Events are a permanent dating sim feature released in Genshin Impact Version 1.4. Learn how to unlock Hangout Events, how to get all characters' Hangout endings, a list of all Hangout Series, and rewards for getting Hangout Memories in this guide!

Who has the best Hangout Event?

What Are Hangout Events? 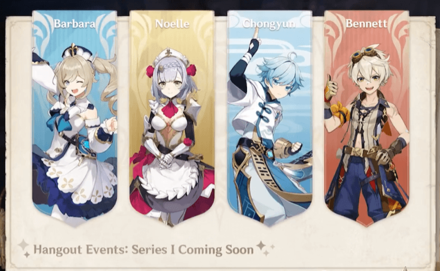 Hangout Events are special Story Quests for most of the 4-Star Characters in Genshin Impact. The Hangouts feature was released in Version 1.4, and Genshin Impact has been releasing new Hangout Series since.

How to Unlock Hangout Events

Use Story Keys to Unlock Hangouts

How to Get Story Keys 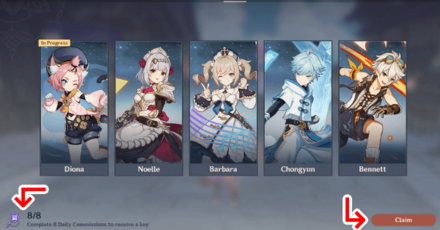 You will have to claim the Story Key once you've done all 8 Daily Commissions before you can begin progress for the next one. There is also a limit of 3 Story Keys at a time, so use them to as soon as you can!

How to Play Hangout Events 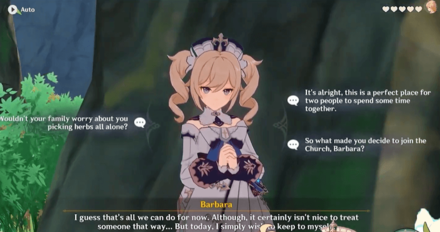 Shikanoin Heizou's first Hangout Event was announced in the 2.8 Livestream, and released on the first half of Version 2.8 as part of Hangout Series 7.

Kuki Shinobu's first Hangout Event was announced in the 2.7 Livestream and released on the second half of Version 2.7 as part of Hangout Series 6.

Ningguang and Yun Jin's first Hangout Event were announced and released sometime on Version 2.4 as part of Hangout Series 5.

Hangout Series 4 features Gorou and Beidou as the stars of these new events released in Version 2.3.

Hangout Series 3 became available with the release of Version 2.2 on October 13, 2021. Play through Sayu and Thoma's hangout events and learn more about these Inazuma characters.

These were the first Hangout Events in Genshin Impact. Noelle's Hangout now has an Act 2, but Barbara, Chongyun, and Bennett's second Hangout Events are yet to be released!

How to Get Rewards from Hangouts

To get Adventure EXP, Primogems, Talent Materials, and Specialty Food from Hangout Events, you have to unlock a character's Hangout Memory. This means you need to play through the quests and get their endings!

The Talent, Ascension, and Specialty Dish rewards differ with each character.

You also get Hangout Achievements!

Apart from the item rewards you get from endings, you'll also get achievements when playing through the Hangout Events! So far, each Hangout Event Act has a total of 3 Achievements.

One of those Achievements will give you 20 Primogems, while the other two will only give 5 Primogems. That's a total of 30 extra Primogems from the Hangout Event!

In order for us to make the best articles possible, share your corrections, opinions, and thoughts about 「List of All Character Hangout Event Guides | Genshin Impact」 with us!