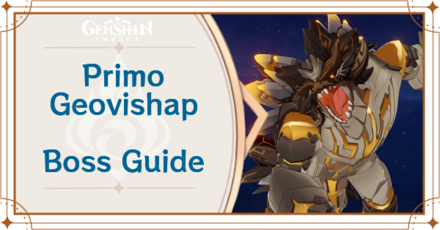 This is a guide on how to beat Primo Geovishaps, an enemy boss in Genshin Impact. Read on to learn more about Primo Geovishap item and material drops, and the best party against this boss!

How to Beat Primo Geovishap

Unlike other world boss battles, the Primo Geovishap can change into different elements. This means you take extra care when picking the right team to face it.

Use Characters with Shields

The Primo Geovishap deals high damage AoE attacks that can take out your characters in a few hits. To counter this, make sure you have at least one character that uses Shields. Using a line-up that has Geo Resonance is also helpful for this fight.

Along with devastating AoE attacks, the Primo Geovishap also has strong close range attacks. Maintain your distance to avoid these attacks, while also having enough room to dodge its ranged attacks.

Fighting the Primo Geovishap requires you to have a character that can create a shield, as it can unleash a powerful attack that can take out members in your party.

This is why Noelle is a great Free to Play option, since she can quickly create shields for your party. Her Passive Talent, Devotion, also gives shields to characters that are below 30% HP, giving them time to heal and escape from attacks.

Here's a quick overview on the best characters to use when fighting the Primo Geovishap.

Having two Geo characters to create Geo Resonance is the best way to win this fight.

Geo Shields protect you from all kinds of attacks from the Primo Geovishap, while giving you additional attack damage while insice the shield.

Before attacking the Primo Geovishap, you can already see their element from a distance. It's best to change your lineup to match against the current element and deal more damage.

A Primo Geovishap in Cryo form means using someone like Diluc and Xinyan is more idea. For the Pyro form, having Mona is a good option. For the Electro form, Ganyu and other Cryo characters like Diona would be the best fit.

This is an attack that the Primo Geovishap commonly uses, allowing it to attack you up-close. Make sure you keep moving and dodge its attack as soon as it rises up.

This attack is capable of taking out characters in one hit, making it the strongest attack in the fight.

To prevent taking a lot of damage, make sure you have a shield on your character to deflect the attack and deal damage to the Primo Geovishap.

This close range attack consists of two claw slashes, followed up by a ground slam. This can knock you back and leave you open for other attacks, which is why it's best to keep your distance.

Another close range attack, the Breath Attack can damage you from a fair distance, and apply elemental effect based on the current form of the Primo Geovishap.

Make sure you have a shield activated, or have enough space to dodge the attack after dealing damage to it.

This attack can hit you any side when fighting the Primo Geovishap up-close. Like most attacks, keep your distance to avoid taking too much damage.

This attack launches elemental projectiles to the ground, releasing an elemental AoE that deals high damage. Be careful where you decide to move then they're present, as you can get trapped between this and the Primo Geovishap's attacks.

Another missile attack, this shoots missiles at a wider radius. Similar to the Tail Missile, be careful where you move, and avoid the AoE to prevent taking damage.

Characters That Use Primo Geovishap Materials

You Can Have Those Back! Achievement

Fine, I'll Do It Myself Achievement

In order for us to make the best articles possible, share your corrections, opinions, and thoughts about 「Primo Geovishap: Locations and Item Drops | Genshin Impact」 with us!