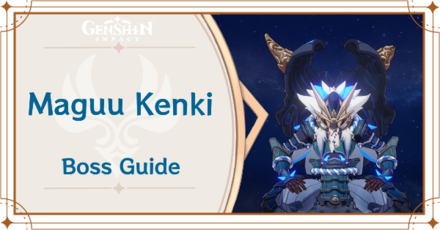 This is a guide on how to beat the Maguu Kenki, an enemy boss in Genshin Impact. Read on to learn more about Maguu Kenki item and material drops, and the best party against this boss! 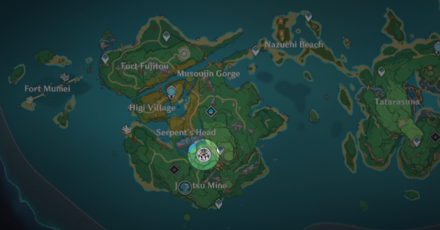 Maguu Kenki can only be found on Yashiori Island in the Inazuma Region. See what else you can find in the Electro Nation in our guide:
View Inazuma Map Guide

Maguu Kenki has a lot of AoE attacks with itself in the center, so if you bring characters that can give shields, you can stay close without worrying about taking damage.

Aim for Close Combat with Shields

As mentioned above, you can make it through the Maguu Kenki boss fight quite easily with a combination of shields and close-ranged attacks. Most long ranged attacks will be parried anyway, so it's better to keep yourself protected and go in full-force.

Play with others if you're struggling

Are you missing specific characters, or have you not built a full party yet? Teaming up with others from our Co-Op boards is a great way to swiftly beat Maguu Kenki and other bosses!

The Maguu Kenki will parry all long-ranged attacks with its shield-like mask, so you will have to get close to fight it. Physical DMG dealers also get the spotlight against this boss. Physical damagers like Eula and Keqing also work well!

Since you want to get close to fight it and Maguu Kenki has several AoE attacks that may catch you off-guard, you should bring a shield character to help lessen the damage.

Attacks Get Aggressive at 70% HP

Maguu Kenki's attacks get more aggressive as its HP gets lower, so keep your guard (and shields!) up.

Attacking the Phantoms Maguu Kenki creates deal no damage to the boss, so it's best to focus on the solid body and avoid the Phantoms instead.

This boss has a mask which will block the majority of bow or catalyst attacks. It also blocks skills with mid range, like Zhongli's Elemental Skill. Maguu Kenki will also swiftly move closer to you as you keep your distance.

Use Long-Ranged when it's attacking

The mask parry is not completely long-range proof! Sometimes the boss will use the mask to attack instead, making it unable to parry. This is a good chance to deal a good chunk of damage.

Not Immune to Anemo or Cryo

While Maguu Kenki's elements are Anemo and Cryo, it's not immune to it. So using Xiao or Chongyun against it can still deal deal damage.

No Damage When Getting Up

It takes a little while after starting the fight before Maguu Kenki becomes vulnerable to damage. Wait till it's completely up before you start attacking.

Launching any long-ranged attacks or Elemental skills such as Fishcl's Oz against Maguu Kenki will trigger its Mask Parry and nullify any incoming damage against it.

A long-distance attack by Maguu Kenki's Mask. It uses the cryo element to attack the area around the mask. Before the attack, the evil mask will appear and spin around your character, so move away when you see it.

An attack where Maguu Kenki will lunge at you. Before attacking, it will draw its sword, so you can avoid it by timing your dash. Since the attack animation is very fast, you can avoid taking damage by putting up a shield beforehand.

A melee attack that attacks the area around Maguu Kenki. The attack animation before the attack is similar to that of Flash, but this attack is more likely to be performed when the character is close to Maguu Kenki. If you move away in time from Maguu Kenki, you will not take any damage. Since the attack is fast and difficult to avoid by moving, it is recommended to use a shield instead.

A melee attack that is performed three times in a row by Maguu Kenki. It's a relatively easy attack to avoid once you learn the movements. The best way to avoid the attack is to move in a circle around Maguu Kenki.

An AoE attack that deals a ton of damage around Maguu Kenki with Cryo Element. Move as far away from Maguu Kenki once you see the pre-attack animation. After this, Maguu Kenki's attack pattern will change and will become more dangerous, so be careful with your movement.

A lunging attack imbued with Anemo, unleashed once Maguu Kenki's attack pattern changes. Similar to Sword Flash, Maguu Kenki will lunge towards you, but instead deals Anemo damage and performs a follow-up slash attack, so stay alert and avoid it by dashing or shielding.

In rare occasions, instead of doing a follow-up slash attack, Maguu Kenki will instead use a Triple Sword Slash (Anemo) and ending it with a Mask Rush. Just move away from Maguu Kenki to dodge all of the attacks.

Maguu Kenki creates an illusion and together sends out ranged slashing attacks towards you. There are a total of four slashes that you can easily avoid by dashing away.

Maguu Kenki creates an illusion and each of them performs three consecutive attacks in a row. Although the range of the attack is wider, the attack pattern is the same as the Triple Sword Slash before and can be avoided by just dashing.

If you move too far away during this attack, Maguu Kenki will attempt to use Sword Flash (Anemo) on you, so try not to stray too far!

Maguu Kenki creates an illusion and performs a combined melee attack that damages everyone around it. Easily avoid taking damage by just moving away from Maguu Kenki.

If I Run Fast Enough... Achievement

Avoid the Maguu Kenki's Phantom Attacks for the entirety of the fight and get the ''If I Run Fast Enough..." achievement after defeating it!

In This Solemn Matter Let No One Interfere! Achievement

Defeat the Maguu Kenki without triggering its long-ranged, Oushi no Omote parry for the entirety of the fight to get the ''In This Solemn Matter Let No One Interfere."

Attack the Maguu Kenki until its HP is at its lowest, then keep your distance without attacking. Wait for the Maguu Kenki to make a taunting motion before swiftly defeating it to get the Puppet Show-Off achievement!

In order for us to make the best articles possible, share your corrections, opinions, and thoughts about 「Maguu Kenki Boss Guide | Genshin Impact」 with us!