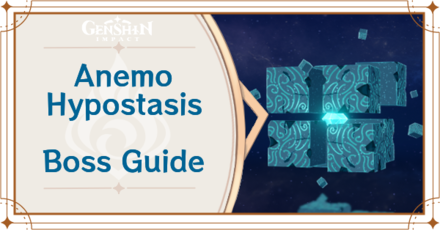 The Anemo Hypostasis can be found in an arena North of the Stormbearer Mountains, in the Starfell Valley area of Mondstadt. You can use the nearby waypoint and head north until you get to the boss area.

Like other world bosses, the Anemo Hypostasis typically respawns within five to ten minutes, sped up by teleporting to a distant part of the map and then teleporting back after some time.

How to Beat the Anemo Hypostasis

The Anemo Hypostasis is immune to Anemo Elemental damage so using Anemo attacks on it won't damage it at all. It's better to use other elements or physical attacks.

Since the Anemo Hypostasis is invulnerable when the cubes are surrounding its body, it is best to stay away while it attacks. It also has attacks that suck your characters in if you're too close!

Attack when it's vulnerable

The Anemo Hypostasis becomes vulnerable after its attacks end, giving you a chance to deal damage freely. It's important to understand the Anemo Hypostasis' attack patterns and learn when you should close in on it!

While they may not be the most effective against damaging the Anemo Hypostasis, these characters all have Elemental Skills that can help you reach the Anemo Orbs faster and with more accuracy!

Recommended Characters for the Anemo Hypostasis

Deal as Much Damage as Possible Quickly

If you want to farm Anemo Hypostasis materials quickly, go for characters that deal massive amounts of burst damage! You can also consider multiple Elements in your party for additional Elemental Reaction damage!
Elemental Reactions Guide

Are you missing specific characters, or have you not built a full party yet? Teaming up with others from our Co-Op boards is a great way to quickly beat the Anemo Hypostasis and other bosses!

The Anemo Hypostasis will pull in nearby characters, making it hard to dash out of the attack. Keep your distance during the Anemo Vacuum and dash towards the Boss again to attack when it's vulnerable.

A vortex will mark where the Anemo Hypostasis will do the Wing Gust, and getting hit by this attack will launch you in the air and stun you. Dash continuously away from the attacks to avoid getting hit!

This attack is only performed when the Anemo Hypostasis has low health. You can easily avoid this attack by jumping at the right times, but we recommend keeping your distance until the attack is over.

How to get other Ascension Materials

How to get other Artifacts

Characters That Use Anemo Hypostasis Materials

"...Not indicative of final product" Achievement

Back With The Wind Achievement

In order for us to make the best articles possible, share your corrections, opinions, and thoughts about 「Anemo Hypostasis Boss Guide | Genshin Impact」 with us!