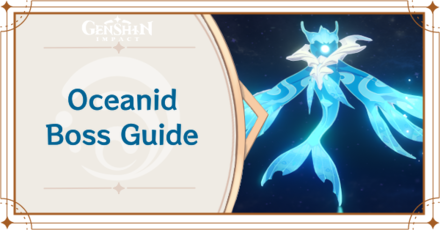 Oceanid is a field boss found near Qingce Village in Genshin Impact. Check out how to beat the Oceanid, the recommended party against it, its attack patterns, and item drops here!

How to Beat Oceanid

Unlike the Primo Geovishap and the Pyro and Cryo Regisvines, the Oceanid cannot be attacked directly.

Instead, it will summon a series of enemies that you have to defeat in order to deal damage to the Oceanid

Every time you defeat 2 batches of Oceanid's water monsters, the Oceanid will sink 2 of the platforms that you are standing on to limit your movement. Make sure that you position yourself carefully since it will be a lot more difficult to move around especially in the last phase.

The water monsters that the Oceanid summons will gradually heal itself over time. It is highly recommended that you only focus on defeating them one by one instead of dealing damage to all of them at once. 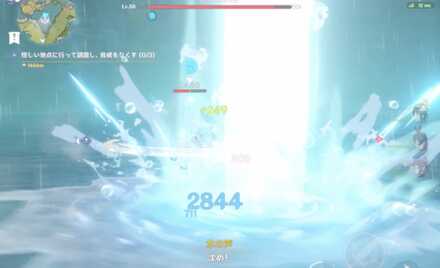 If you take too much time in defeating the water monsters that the Oceanid summons, the Oceanid uses a powerful attack that cannot be avoided even if you run.

This can take out your party members quick, which is why it's important to defeat enemy spawns quickly, or use shields and healing to keep your characters safe.

When it comes to the best Free to Play character option to use against the Oceanid, Kaeya stands out becuase of his ability to freeze enemies in place during the fight.

His Elemental Skill can create quick Freeze reactions, while his Elemental burst is very useful against mobs. You can also set up Melt and Superconduct reactions, both of which deal high damage.

Xiangling and Lisa are also very effective against the Oceanid thanks to their Vaporize and Electro-Charged Reactions, respectively.

Using them in tandem with Kaeya helps them deal even more damage, making quick work of Hydro Mimics in the process.

Here's a quick overview on the best characters to use when fighting the Oceanid.

Having Cryo Resonance in your party will help make this fight easier. The 15% increased CRIT Rate against enemies frozen or affected by Cryo enables you to deal more damage to each Hydro Mimic.

Along with Cryo Resonance, having Electro Resonance in your party is also helpful, as you get 40% Hydro RES, protecting you against Hydro Mimic attacks.

Pyro Resonance is another effective combination against the Oceanid. Vaporize is a reaction that deals high DMG, and combining with Cryo creates Melt, another strong reaction.

The Hydro Mimic Finch attacks by jumping on you, dealing AoE damage in a large area. Prevent them from attacking by freezing them, or use shields while dealing damage.

The Mallards have a Hydro AoE surrounding them, which means attacking them up-close is not a good option. Use ranged attacks from a Bow or Catayst user to deal damage from a distance.

These boars will attack by charging at you, which can knock you down and even put you in the water. Dodge their attacks and find an opening to counter them with your own attacks and abilities

These Ferrets have a wide range attack using their tails that deal Hydro DMG. Keep your distance as they attack, and close in with your own set of attacks.

Hydro Mimic Cranes are slow moving enemies that deal long range attacks. They flap their wings before each attack, which is a signal for you to dodge them.

Be sure to attack them early, as their ranged attacks deal high DMG if you're not careful.

Hydro Mimic Frogs have two types of attacks: a long-range attack similar to the Crane, and a jumping AoE attack like the Finch. Focus on attacking them when they spawn, as they are very difficult to deal with, especially with multiple enemies present.

These flying enemies are very challenging to fight against, since you need a Bow or Catalyst user to attack them constantly. They have a dive attack that can knock you down as well, which is important to dodge or shield against.

Crabs are fast moving enemies that have a bubble attack that deals high damage when they get close. Freezing them using Cryo or shocking them using Electro can help you slow them down.

Characters That Use Oceanid Materials

In order for us to make the best articles possible, share your corrections, opinions, and thoughts about 「Oceanid Weakness and Strategy Guide | Genshin Impact」 with us!