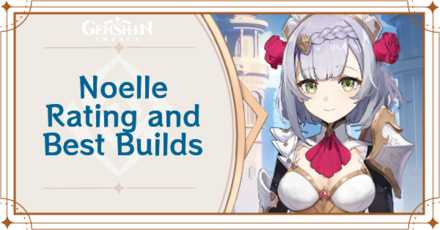 Noelle is a 4-star Geo Claymore character in Genshin Impact. Learn about Noelle's stats, strengths and weaknesses, Japanese voice actor, best weapon and builds, and our rating of the character in this complete profile!

How to Get Noelle 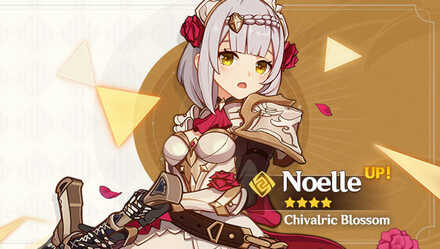 The easiest way to get Noelle is with a 10-pull on the Beginner's Wish Banner. She's guaranteed from the first 10-pull on that gacha, but not the 10-pull after that.

Noelle is available at a normal rate on all Standard Wish Banners. This means you can get her from Wanderlust Invocation, Epitome Invocation, and the current Character Event Wish.

As a 4-star character, Noelle has a chance to appear in the Starglitter Exchange every month. She can be traded for 34 Masterless Starglitter.

At Max Constellation, Noelle's Artifact stats should lean more towards DEF. However, if Noelle's Constellation level is below C6, her ATK and DEF should be balanced.

Best Artifacts and Weapons for Noelle

How to Use Noelle

Shield Up and Heal Up

Noelle's shield will auto trigger if she is not on the battlefield and the active character drops below 30%. This is a great emergency defense mechanism that could save your main DPS from certain doom!

Despite being a defense-based character, Noelle has the potential to deal heavy damage!

Noelle's Elemental Burst, Sweeping Time, converts all Normal Attacks into Geo AoE attacks and boosts her Attack stat based on her Defense. Keeping her Defense and Attack stats as high as possible will yield the best results for Noelle's Damage and survival.

Register as a member and get all the information you want. (It's free!)
Login
Opinions about an article or post go here.
Opinions about an article or post
We at Game8 thank you for your support.
In order for us to make the best articles possible, share your corrections, opinions, and thoughts about "Noelle Rating and Best Builds" with us!
When reporting a problem, please be as specific as possible in providing details such as what conditions the problem occurred under and what kind of effects it had.