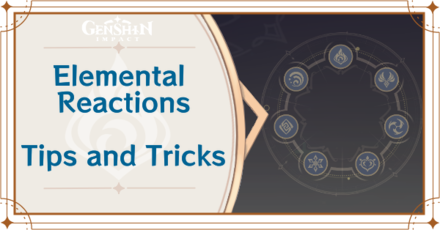 Click on the name to jump to that section of the page! 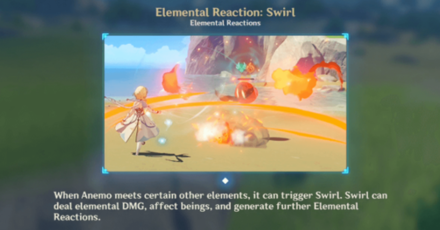 The Swirl elemental reaction activates when Anemo is used on an enemy that has Pyro, Hydro, Electro, or Cryo already applied to it. When a Swirl reaction occurs, the element reacted will hit nearby enemies as AoE damage and apply that element to them as well.

For example, when Hilichurls and Cryo Slimes are standing on water, hitting the Cryo Slime with Anemo will spread Cryo to all nearby enemies, freezing the Hilichurls due to the Frozen reaction!

The only way to increase Swirl DMG is by increasing the Elemental Mastery of the character triggering the reaction. 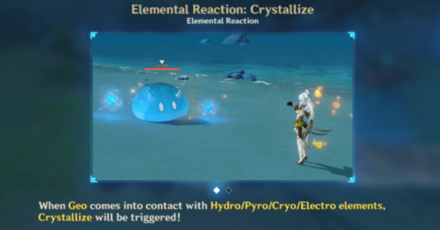 Crystallize activates when a Geo attack hits an enemy that has Pyro, Hydro, Electro, or Cryo applied to it. When a Crystallize reaction occurs, the applied element on the enemy will disappear(if possible) and an elemental shield crystal corresponding to the element will spawn.

The shield spawned will protect the player from all kinds of attacks. However, it will be more efficient in protecting against attacks corresponding to the element of the shield. 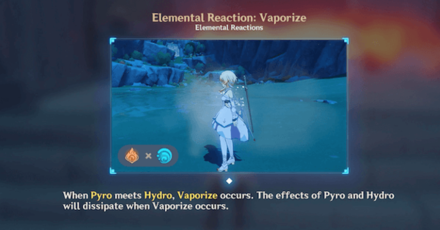 Vaporize activates when Pyro comes into contact with Hydro and vice versa. When Vaporize occurs, the target will take increased multiplicative damage and their previously applied element will be removed(if possible).

It's important to note that applying Hydro on a Pyro affected enemy will deal x2 while doing the opposite will deal only x1.5.

Another thing that's important to note is that Vaporize damage will only depend on the ATK% and Elemental Mastery of the character applying the second element!

Common team compositions that make use of this combo are Tartaglia + Xiangling and Hu Tao + Xingqiu. 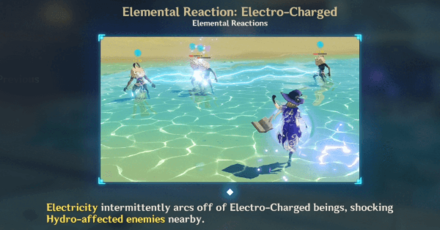 Before attacking with Electro, make sure to use Hydro attacks on all enemies, then swap to Electro! When it's raining, the Wet status will be applied to everything in the area, making it easy to cause an Electro-Charged reaction.

Increasing the Elemental Mastery of the character triggering Electro-Charged will increase the damage over time caused by the reaction!

Common team compositions that make use of this combo are Beidou + Xinqgiu and Tartaglia + Fischl. 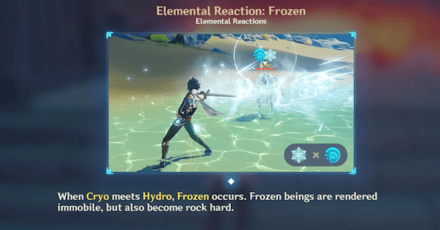 Frozen occurs when Hydro and Cryo come into contact with one another. When Frozen activates, the target will be unable to move. Frozen can be set off against enemies in water or rain.

Frozen enemies can be shattered, which deals Physical Damage. Examples of attacks that can shatter frozen enemies are Claymores, Plunging Attacks and Geo Attacks. Increasing the Elemental Mastery of the character triggering the shatter will cause it to deal more damage.

Common team compositions that make use of the Frozen reaction are Ayaka + Mona and Ganyu + Kokomi. 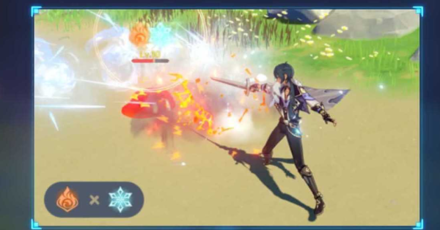 Melt occurs when Pyro and Cryo come into contact with one another. When a target is hit with Melt, they will take increased damage and their previously applied element will be removed(if possible).

It is important to take note that dealing Pyro damage to Cryo affected enemies will deal x2. Doing the opposite will only deal x1.5 the amount of damage, which is commonly referred to as Reverse Melt.

Increasing the character's Elemental Mastery and ATK% will also increase the overall damage of the Melt Reaction.

Common team compositions that make use of the Melt reaction are Ganyu + Xiangling and Rosaria + Xiangling. 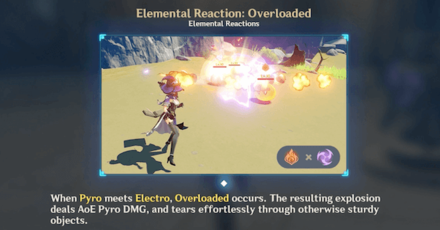 Overloaded occurs when Electro and Pyro come into contact. When Overloaded activates, AoE Pyro damage will hit all nearby enemies. However, enemies will also be knocked back, which can cause other attacks to miss!

Damage dealt by the Overloaded reaction can be increased by increasing the Elemental Mastery of the character triggernig the overload effect.

A common team composition that uses the Overloaded reaction is Yoimiya + Beidou. 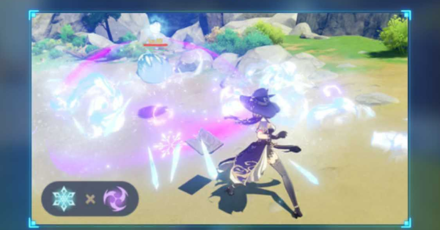 Superconduct occurs when Electro and Cryo come into contact. When a Superconduct reaction activates, AoE Cryo damage will hit nearby enemies and will lower their physical resistance for 12 seconds.

The damage of Superconduct can be increased by the amount of Elemental Mastery the character who is triggering the reaction has. The amount of the physical resistance reduced will always be a fixed amount of about -40%. 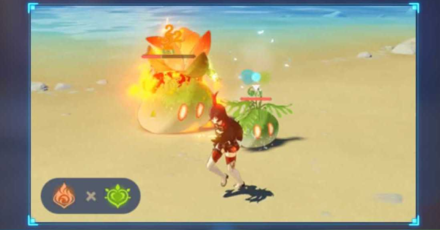 Burning activates when Pyro comes into contact with Dendro. When a Burning reaction occurs, Pyro damage will be dealt over time for around 5 seconds. Burning can also be used to destroy Dendro objects in the field like thorns.

Hydro and Dendro mixing together will create a Dendro Core. Dendro cores can interact with Pyro, which will make the seed explode, or with Electro, which turns it into a homing missile. Dendro Cores can explode on their own after a set time or if too many are on the field.

Dendro Cores will explode when it comes into contact with Pyro. The explosion will cause AoE Dendro DMG

Dendro Cores will transform into homing missiles when it comes into contact with the Electro Element. These missiles seek out the nearest enemy and deals Dendro damage.

When Electro and Dendro comes into contact with each other, it will apply the Quicken status. This status will open enemies up to other Catalyze Reactions.

This list is not the end all be all for how you should build teams in the game. The list is simply to help you choose which reactions you should be aiming for if you had certain limitations.

An Amber Main DPS Melt team will do way less damage compared to a Tartaglia Electro-Charged team, so play around the characters, not the elemental reactions! 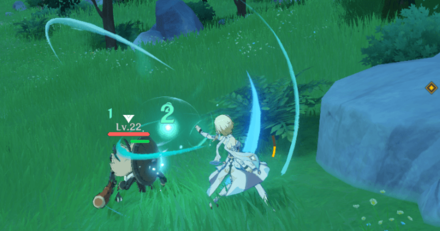 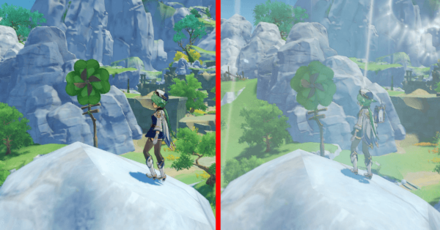 You can find windmills all around the wilds of Teyvat. Using the anemo skill on the windmill will activate a wind current that you can use to reach high places. 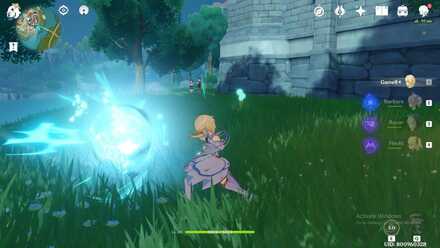 Using the anemo skill on Dandelions will allow you to collect the seeds. 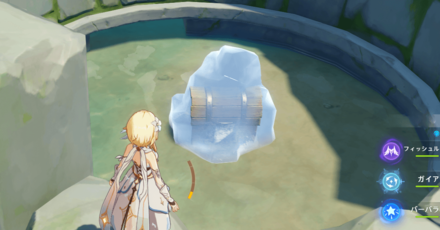 You can use the Pyro skill to melt frozen chests so you can open them. 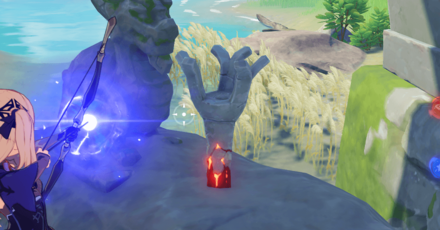 While adventuring through Teyvat, you can find torches that you need to light up with a Pyro skill. Usually lighting all torches in an area will reward you with a chest to open. 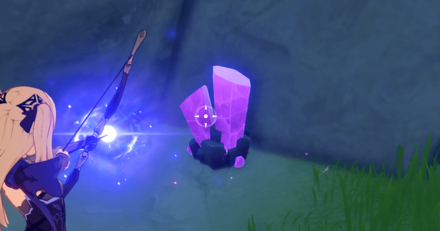 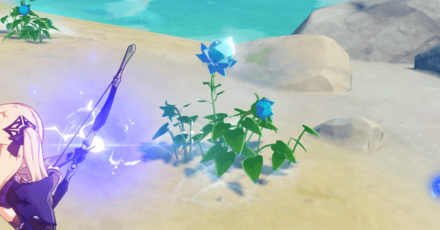 Mist Flowers can often be found in lakes or bodies of water surrounded by a small frozen area. Using the Pyro skill will allow you to gather these Mist Flowers. 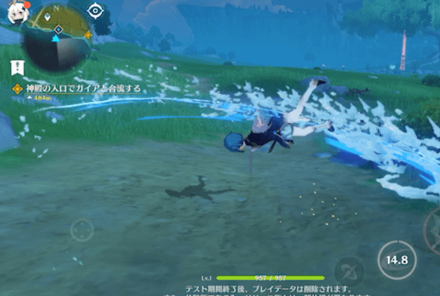 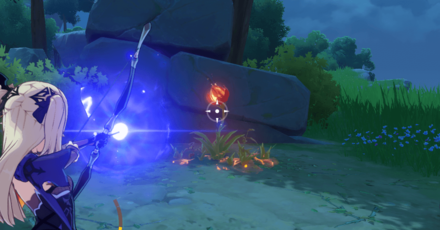 Flaming flowers can be found in the grassy fields of Teyvat. Using a Hydro skill on them will allow you to collect the Flaming Flower Stamen. 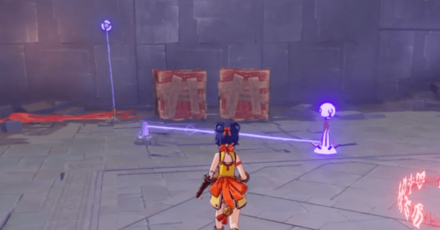 Some dungeons have electric circuit puzzles that you need to activate using an Electro skill. 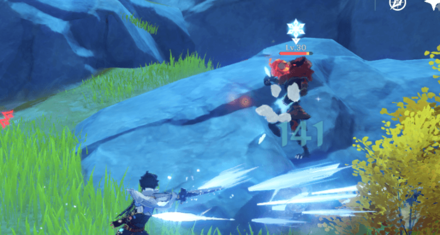 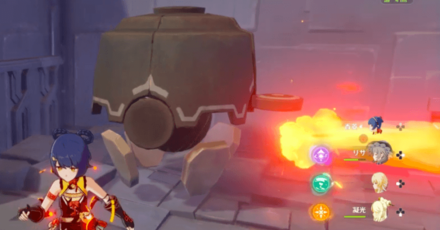 Some dungeons have fire traps that you can temporarily disable by using the cryo skill on them.

Using a Cryo skill on water can freeze it, allowing you to stand and walk on it. This is useful when you need to cross long bodies of water without using up your stamina.

Flaming flowers can be found in the grassy fields of Teyvat. Using a Cryo skill on them will allow you to collect the Flaming Flower Stamen. 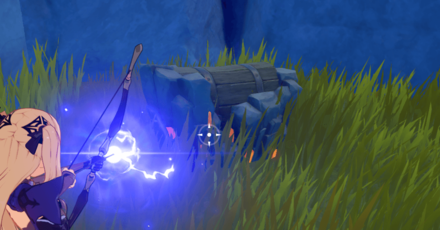 Geo skills can be used to break rocks, ores, and even the rock shield more efficiently. 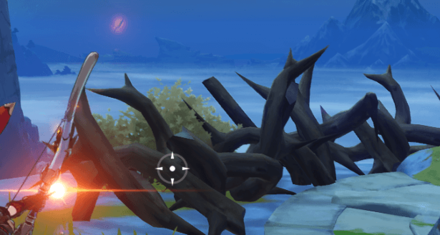 How to Increase Damage of Elemental Reactions 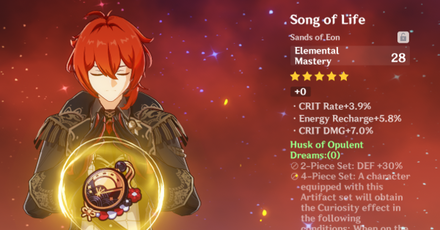 What is Elemental Mastery and Effects

In order for us to make the best articles possible, share your corrections, opinions, and thoughts about 「Elemental Reactions Guide | Genshin Impact」 with us!