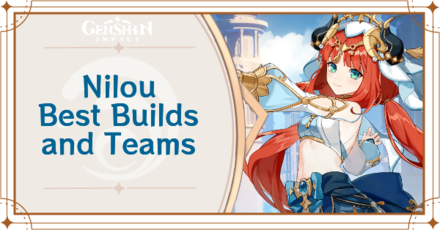 This Nilou build focuses on her best role as a Sub-DPS who enables the creation of Bountiful Cores. You will want to stack HP% Main Stats to increase her Bountiful Core damage.

Elemental Mastery substats will only be useful on Nilou if she will trigger Bountiful Cores, which is unlikely in certain team comps like Triple Hydro with Solo Dendro.

Nilou can work as an on-field unit who can help create Bountiful Cores through by applying Hydro via her Sword Dance form. The Sacrificial Sword is a very good weapon here since it enables you to use both Elemental Skill forms for Nilou to maximize her Hydro application on enemies.

An HP%/Hydro/CRIT Mainstat combo is not better than HP%/HP%/HP% because a big part of the damage still comes from Bountiful Cores.

A 2pc. Tenacity of the Millelith will always be needed for Nilou to increase her HP. The other 2pc. will depend on if she's triggering Dendro Core Reactions (Gilded Dreams/Wanderer's Troupe), if you want more personal DMG (Heart of Depth), or if you need more Energy Recharge (Emblem of Severed Fate).

HP Weapons are Best for Nilou

Any weapon that has HP% Bonus Stats will be very good for Nilou to increase her Bountiful Core DMG. Unfortunately, only the Key of Khaj-Nisut (a 5-star weapon) currently fits this role.

Iron Sting is a Great Option

The Iron sting is Nilou's Best F2P craftable weapon since it increases all of her damage thanks to its passive and her Elemental Mastery, which will increase her Bountiful Core damage in the situations where she triggers them.

The Sapwood Blade can also be considered as a more supportive option and if you need ER. However, it has the same problems as having Elemental Mastery stats on Nilou in the sense that the passive will only be useful if she triggers a Bloom reaction.

All Recommended Weapons for Nilou

Due to the nature of Nilou's gameplay, you will be forced to run either a Hydro or a future Dendro healer if you are to survive from self-inflicted damage.

Nilou as a Main DPS in a F2P team will have her act as the primary enabler for applying Hydro on Enemies. It is best if Nilou uses a Sacrificial Sword as an on-field unit so that she can use her two Dance Forms to apply Hydro on enemies.

Once her Sword Dance form's duration has ended, you can swap to Barbara to keep applying Hydro on enemies.

As of now, Nilou's team comps are extremely limited. Future characters, particularly a Dendro Main DPS (other than Nahida) or a Dendro Healer, will further enhance NIlou's flexibility and could make her more competitive against higher-end teams.

C2 for an Amazing Debuff

Nilou's best constellation is The Starry Skies Their Flowers Rain, which is her second constellation. It's the best one to unlock if you plan on heavily investing in Dendro Core-focused teams. This provides a huge DPS increase for your Hydro and Dendro characters while also being very easy to trigger.

How to Use Nilou 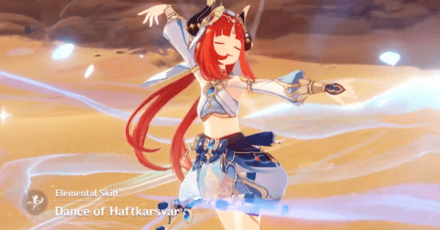 Nilou's Elemental Skill deals AoE Hydro damage, converts her attacks to Hydro, and has two forms that can change depending on what you do after activating the Elemental Skill.

If the third dance step from Dance of Haftkarsvar is a Normal Attack she will enter the Sword Dance form. This form converts all Normal Attacks into Hydro DMG and sends out a wave that deals Hydro DMG.

If Nilou uses her Elemental Skill again for her third dance step, she will enter the Whirling Steps form. During this form Nilou will twirl around, dealing AoE Hydro DMG. At the end of the attack, she will create a Tranquility Aura that applies the wet status around the enemies within the AoE.

The Golden Chalice's Bounty state will only be available if the entire party consists of only Dendro and Hydro characters. This state will trigger after the third hit from Dance of Haftkarsvar.

During this state, all characters will have increased Elemental Mastery and will create Bountiful cores instead of Dendro Cores when triggering the bloom reaction. Bountiful Cores are bigger, more powerful, and explode instantly. 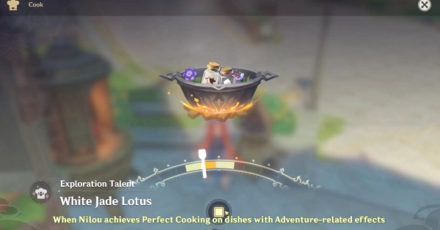 How to Get Nilou

Nilou is currently available in the Character WIsh banner called Twirling Lotus. She will be available from October 14 to November 2, 2022! 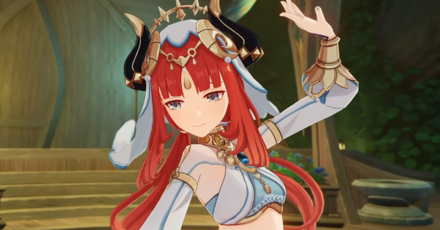 Nilou is a 5-star Hydro character from Sumeru who uses a Sword as her weapon. You first meet Nilou during Chapter 3: Act 1 Archon quest, where she eventually plays a key role in unlocking Sumeru's mysteries!

Nilou was officially released as a playable character during the second phase of Version 3.1 on October 14, 2022.

See more comments (58 Comments)
Opinions about an article or post

In order for us to make the best articles possible, share your corrections, opinions, and thoughts about 「Nilou Best Builds and Artifacts | Genshin Impact」 with us!