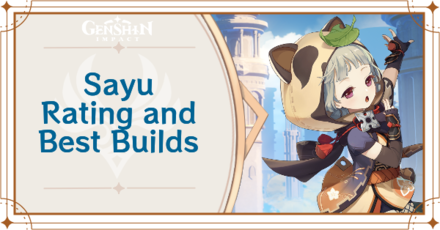 Sub-DPS and Support Builds for Sayu

This Sayu Sub-DPS build focuses on dealing DMG when through her Elemental Skill. This build is recommended if you want Sayu to be on the field more often than not.

This Sayu Support build utilizes her Elemental Burst to be able to heal as much HP as it can while also being able to decrease enemy Elemental RES.

Regardless of how you build her, Sayu's most important talent to level up is her Elemental Burst as it can provide off-field DMG and healing. Afterwards, level up her Elemental Skill to deal decent damage while rolling around.

All Recommended Weapons for Sayu

C6 for a Sub-DPS and Healer Hybrid

By unlocking C6 for Sayu, you can forgo any healing artifact and stack a Viridescent Venerer 4pc. set with EM main stats on her. This will give you the best of both worlds for a Sub-DPS and Healer Anemo character.

How to Use Sayu

Sayu uses a Claymore, which means her attacks hit harder against enemies and are useful for destroying enemy shields. Claymore users like Sayu can also mine ores with ease!

Elemental Skill Gets Her Rolling!

Sayu's Elemental Skill, Yohooo Art: Fuuin Dash, allows her to roll at high speeds! Tapping her Elemental Skill curls her into a ball to shoot a short-distance forward to attack an enemy in range. Holding it lets you roll around longer while dealing continuous Anemo DMG!

When using her Elemental Skill's hold function, Sayu becomes one of the fastest characters in-game! Her roll is faster than Ayaka and Mona's Dash, so it's useful for exploring. Take note that you can't roll on water unless you absorb Cryo!

Elemental Burst Can Heal and Attack

Sayu's Elemental Burst, Yoohoo Art: Mujina Flurry, can heal the entire party while also dealing Anemo DMG to nearby enemies! After using her Elemental Burst, Sayu will leave behind a Muji-Muji Daruma.

What is a Muji-Muji Daruma?

The Muji-Muji Daruma can either heal your party or deal Anemo DMG to nearby enemies, depending on your active characters' HP.

If your HP is above 70%, the Muji-Muji Daruma will deal Anemo DMG to nearby enemies. Otherwise, it will switch to a healing function. This limit is removed at 1 Constellation, letting Sayu heal and attack without any conditions.

Sayu's Passive Talent, Yoohoo Art: Silencer's Secret, allows her to sneak up on certain wildlife. This skill works on animals in the ''Other'' sub-category of the Living Beings Archive. It's perfect for Crystalfly-hunting!

Since Sayu's Elemental Skill absorbs in nearby Elements, it might be difficult to battle Elemental Enemies like Slimes.

For example: if you use her skill on Pyro Slimes, you will absorb the Pyro Element. Since Pyro Slimes are immune to Pyro, it won't do much damage.

How to Get Sayu

Sayu is available at a normal rate on all Standard Wish Banners except Beginner's Wish. This means you can get her from Wanderlust Invocation, Epitome Invocation, and the current Character Event Wishes.

See more comments (44 Comments)
Opinions about an article or post

In order for us to make the best articles possible, share your corrections, opinions, and thoughts about 「Sayu Rating and Best Builds | Genshin Impact」 with us!