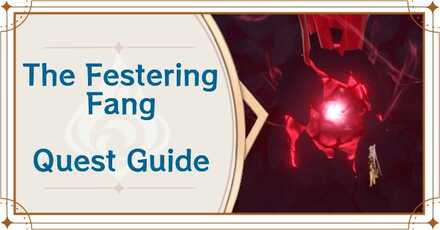 The Festering Fang is a World Quest in Genshin Impact. Learn how to unlock this Quest and where it is found, as well as its rewards and a full walkthrough for completing the Quest.

The quest will begin when you pick up a Strange Tooth from any of the 4 locations after the Version 1.2 update.

The Festering Fang Walkthrough and Rewards

You picked up a strange dragon tooth while adventuring in Dragonspine. Perhaps you should ask around and see if someone knows anything more about it...

There are a total of 4 locations where you can find the Strange Tooth. The quest begins once you pick one up from any of the 4 locations.

Don't worry about which one you pick up initially, because during the quest you will have to collect the 3 remaining ones.

1. Inside a cave with the heart

This can be found fairly easily, head over to the area and look for a cave entrance. The Strange Tooth should just be right in front of the glowing red heart.

2. Protected by a Frostarm Sawachurl

The Strange Tooth in this area is being protected by a force field. You will have to defeat the Frostarm Sawachurl first in order to get it.

3. Middle of the river encased in ice

You can find this Strange Tooth encased in ice that you can only melt with the help of Scarlet Quartz. You can find one on the side at Dragonspine, near a Seelie Court.

There is also a Cryo Abyss Mage and a Hydro Abyss Mage in the area, you can defeat them first so that it will be easier to collect the Strange Tooth. 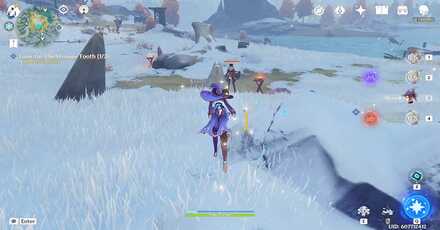 This Strange Tooth is protected by some Fatui Harbingers, and you can find it by interacting with some shiny objects.

There are different enemies and tasks you need to do during this quest so it's best to be prepared for it.

Pyro characters are an essential for any quest or adventure in Dragonspine, not only because most of the enemies are Cryo, but also to light up any campfires and torches to keep your party warm.

You will also have to defeat a Frostarm Sawachurl for one of the Strange Tooth, Pyro attacks will make quick work of its shield.

You will also be facing off against a lot of Fatui Skirmishers with varying elements. Having the right character on your team can make the battle easier.

If you don't have it already, you will have to collect 50 Starsilver ores from around Dragonspine. If you have Ningguang, her passive will show you where the ores are on the minimap.

Register as a member and get all the information you want. (It's free!)
Login
Opinions about an article or post go here.
Opinions about an article or post
We at Game8 thank you for your support.
In order for us to make the best articles possible, share your corrections, opinions, and thoughts about "The Festering Fang World Quest Walkthrough and Rewards" with us!
When reporting a problem, please be as specific as possible in providing details such as what conditions the problem occurred under and what kind of effects it had.