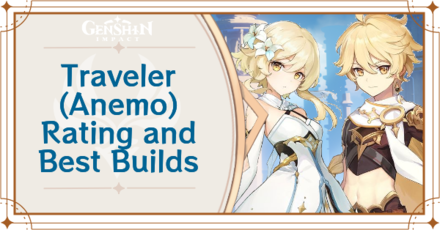 This Traveler (Anemo) build focuses on shreding enemy RES through the use of the Viridescent Venerer set while also dealing a decent chunk of Anemo DMG.

Prioritize on leveling up the Traveler's Elemental Skill first as you'll be using it more frequently than their Elemental Burst. Only level up their Normal Attack talent if you plan on using them on the field for Normal Attacks.

All Recommended Weapons for Traveler (Anemo)

Unlocking Traveler (Anemo)'s final constellation allows them to be a support by decreasing enemy Anemo and Elemental RES.

How to Use Traveler (Anemo)

Spread Elements to Nearby Enemies

The Anemo Traveler's Elemental Skill, Palm Vortex, can be used to not only pull enemies in but to also spread any elemental auras or applications to near by enemies. This is usefull for setting up large chains of Swirl and other Elemental Reactions.

The Elemental Burst, Gust Surge, summons a tornado acts similar to Palm Vortex in spreading elemental effects but will also pick up and carry off smaller enemies. Like all Anemo Element skills the tornado can also absorb other elements and deal additional elemental damage.

Their sixth constellation gives the Traveler's Elemental Burst another skill. It can lessen their enemies' Anemo RES by 20% and if their burst also absorbed an element then it will have an additional 20% Elemental RES effect.

Better as a Sub-DPS or Support

In order for us to make the best articles possible, share your corrections, opinions, and thoughts about 「Anemo Traveler Rating and Best Builds | Genshin Impact」 with us!