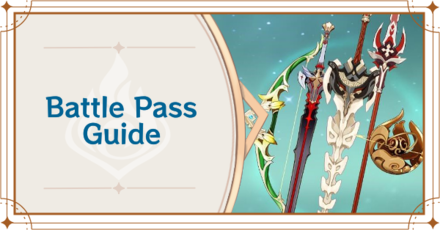 The Battle Pass has Weapons and Materials that can help your account progression in Genshin Impact. Learn more about the Battle Pass Weapons, our tier list for the weapons, and find out if the Battle Pass is worth it in this guide!

Version 3.0 was released on August 24, along with a renewed Battle Pass!

However, in this version, they've added a much-needed update regarding the weekly missions.

The Battle Pass usually releases near the middle of the week. This causes situations where users might miss out on the weekly battle pass mission rewards if they already did things like the weekly bosses.

From now on, any weekly missions completed in the week of a version update will now carry over when the Battle Pass releases!

The Battle Pass for Version 3.1 will be released on September 28, 2022, right after it goes live! Like in the previous version, you'll only need 900 BEP to get to the next level.

What is the Battle Pass ?

Here's what you need to know about Genshin Impact's Battle Pass.

The Battle Pass will allow you to get more rewards as you complete various tasks in the game. By completing in-game tasks, you will earn Battle Pass EP (BEP) that is used to increase your BP Level. Each level rewards you with different prizes, which includes Mora, Enhancement Ores, Fragile Resin, and Fates.

To get the rewards from the Battle Pass, Travelers must accomplish a series of Daily and Weekly tasks. Accomplishing these tasks will give you BEP, which allows you to complete each level and receive your rewards.

Genshin Impact's Battle Pass has a free and paid option. Both grant you different kinds of rewards, with the paid option giving you more materials, and even a weapon.

The Sojourner's Battle Pass is the free option. This is available to all players who have reached Adventure Rank 20, allowing you to receive materials, Mora, and free Wishes.

The Gnostic Hymn is the paid version of the Battle Pass. Purchasing this allows Travelers to receive all item rewards upon reaching the required levels.

Another paid option is the Gnostic Chorus. This allows you to receive all current Battle Pass rewards, along with instantly unlocking 10 levels worth of rewards. You also receive a special Namecard corresponding to the current event.

How Much is the Battle Pass?

The two paid Battle Pass tier prices and rewards are as follows (prices are listed in US dollars).

If you bought the Gnostic Hymn, you will be able to choose one of five weapons in the battle pass after reaching BP Level 30. Below is a list of the battle pass weapons and the recommended characters for them.

This weapon tier list will help you decide which weapon you should claim when you hit level 30 on the Battle Pass. However, don't let this stop you from claiming any of the weapons if you need a certain weapon type!

Is it Worth Buying the Gnostic Hymn Battle Pass?

If you actively play Genshin Impact, then it's recommended to buy the Gnostic Hymn Battle pass, since this package contains useful materials for enhancing your characters and equipment.

Finishing your daily tasks and at least half of your weekly tasks will help you gain levels quickly.

It takes Effort to Grind for Rewards

Grinding for items in the battle pass requires doing dailies and weeklies. If you cannot actively play everyday, buying this battle pass is not recommended.

It is recommended to skip the Gnostic Chorus. While it contains an additional 5 Fragile Resin, it's best to hold off buying it until all the Battle Pass rewards have been unlocked. Getting the Gnostic Hymn is a much more cost-effective option, giving you all of the important rewards (Weapon and Materials) at a much lower price.

How to Level Up Battle Pass

These missions can be daily, weekly, or missions that span the whole BP period.

Daily Missions reset everyday at 4:00 AM, depending on the local server time. Any unclaimed missions will reset to zero and you will have to start over again for the day.

Weekly Missions reset every Monday at 4:00 AM, depending on the local server time. Any unclaimed missions will reset to zero and you will have to start over again for this week.

Along with these tasks, you can also accomplish special event missions. These missions will only be available for a certain time period, which means you have to accomplish them before they end.

Complete all the Daily Missions

Completing Daily Missions will give you 645 Battle Pass EXP, for a total of 4,515 EXP every week.

Some Weekly Missions are Easy to Complete

The following Weekly Missions can be completed without needing to use up Original Resin. Especially if you have a well-built Housing, these missions will be easier for you to complete.

For example, you can cook Teyvat Fried Egg 20 times with a cheap ingredient, to complete ''Cook 20 Dishes'' mission.

Do Low Level Domains Without Claiming to Complete Missions

You can also complete bosses, domains, and Ley Line missions by simply defeating the boss or mobs without claiming the rewards, and it will add up to your BP mission count! Make sure to do low-level ones when doing this so it's faster!

Use Primogems to Level Up Battle Pass

You can also use 150 Primogems to level up your Battle Pass by 1. While this is an option you can use, it is much better to save your Primogems and use it on Wishes.

In order for us to make the best articles possible, share your corrections, opinions, and thoughts about 「Battle Pass Guide and Best Weapons | Genshin Impact」 with us!