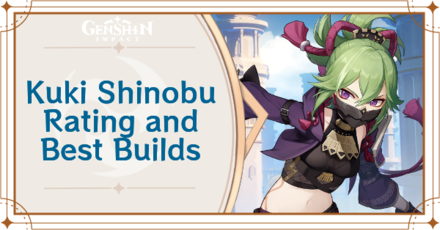 This Shinobu Sub-DPS build focuses on maximizing her damage for Hyperbloom teams. Shinobu only needs to use her Elemental Skill for this role, so needing high Energy Recharge isn't necessary.

This Shinobu Sub-DPS build for Shinobu is more suited for her role in Aggravate teams to enhance her damage, but can also work in non-Dendro teams as well! Shinobu will need around 160% Energy Recharge, which can be reduced depending on your team comp.

This Shinobu support build provides a consistent +20% ATK DMG bonus to the entire party from the 4pc. effect of the Artifact. An Electro DMG Cup with an HP% Circlet can be used for more DMG. Make sure to get CRIT Rate if you're using the Favonius Sword!

Shinobu's Elemental Skill brings together off-field DMG and healing into one talent. It's arguably her key defining trait and should be leveled up first. Next would be her Elemental Burst while her Normal Attacks can be left alone.

All Recommended Weapons for Kuki Shinobu

Kuki Shinobu can be used in any team comp that requires both a healer and off-field Electro DMG.

This Dendro team comp for Shinobu focuses on her triggering the Hyperbloom reaction by using her Elemental Skill to hit Dendro Cores.

This Shinbou Aggravate team focuses on keeping the Catalyze Aura permanently applied on the enemy.

This Shinobu team comp brings together the leader and deputy officer of the Arataki gang! Without a C4 Gorou, the usual problem of an Itto-Gorou team is a lack of healing. Shinobu in the party fixes that issue by providing healing and triggering a Crystalize reaction for shields!

Shinobu in Superconduct teams is a perfect role for her as an off-field Electro support character. By swapping Diona for Shinobu, you can add more Cryo DPS and buffs for Eula's damage.

Shinobu is an excellent choice as the 2nd electro unit for any Electro-Charged team comp. Having Shinobu constantly deal Electro DMG while off-field ensures there isn't any gap in between applying Hydro and Electro!

C4 for a Better Sub-DPS

Shinobu as a support character is perfectly fine at C0. However, players who want to turn up her DMG as an off-field character should consider unlocking her 4th Constellation. What makes it so good is that you won't need to swap out HP as her Mainstat to deal extra DMG.

How to Use Kuki Shinobu

Kuki Shinobu's Elemental Skill, Sanctifying Ring, sacrifices a portion of her health and summons a ring that will periodically heal the active party member and damage surrounding enemies with Electro DMG.

If Kuki Shinobu's current health is less than 50%, the duration is extended. Try to safely keep Kuki Shinobu's health within this range to reap the benefits!

Shinobu with a Favonius Word

Use Burst then Skill

How to Get Kuki Shinobu

Kuki Shinobu is available at a normal rate on all Standard Wish Banners except Beginner's Wish. This means you can get her from Wanderlust Invocation, Epitome Invocation, and the current Character Event Wishes.

Who is Kuki Shinobu? 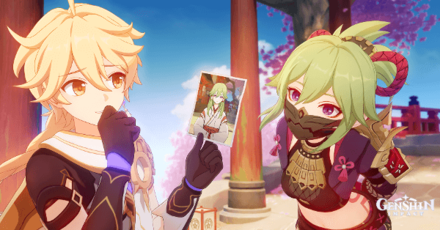 Kuki Shinobu is the Deputy Officer of the Arataki Gang. Though Itto wouldn't admit it, she takes on more of a Leader role when it comes to taking care of the Gang. From getting the group out of legal trouble to mediating for Itto when he causes problems, people can always count on her professionalism and wits.

Shinobu was officially released as a playable character during the second phase of Version 2.7 on June 21, 2022.

Shinobu's Thoughts About Others

See more comments (39 Comments)
Opinions about an article or post

In order for us to make the best articles possible, share your corrections, opinions, and thoughts about 「Kuki Shinobu Builds and Guide | Genshin Impact」 with us!