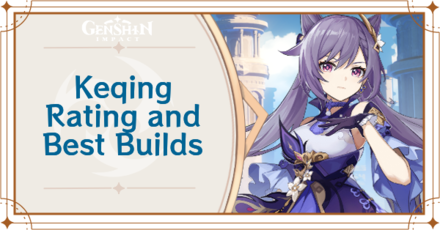 This Electro build focuses on Keqing's Electro infused Normal and Charged Attacks through using her Elemental Skill. It is currently her best set when paired with Dendro characters!

This Keqing build utilizes her Elemental Skill then Charged Attack combo, which results in your weapon not being infused by Electro.

Regardless of how you build Keqing, her Normal Attack talent is the most important one to upgrade as her playstyle revolves around her Charged Attacks. Afterwards, level up her Elemental Burst as it deals a lot more DMG than her Elemental Skill.

All Recommended Weapons for Keqing

This Electro DMG team comp can be used on enemies who can't be frozen. Fischl can provide Electro particles for Keqing. Kazuha and Yelan will provide DMG buffs so that Keqing can deal more Electro DMG.

Keqing's C4 constellation can essentially become a permanent ATK buff for her due to how easy it is to trigger Electro-based Elemental Reactions.

How to Use Keqing

Keqing is one of the fastest sword users in the game. Her Charged Attack is also very strong, and can be used in quick succession. This is very effective for boss battles and other large enemies, as you can deplete their HP very fast.

Stellar Restoration is Great for Combat and Exploration

Keqing's Elemental Skill, Stellar Restoration, enables her to reposition herself quickly in combat, while dealing high damage to enemies.

You can hold and aim this skill, giving you more control on where to position yourself when fighting. Blinking to the location of the marker allows her to deal a devastating slash attack, and lets her Normal Attack deal Electro DMG

You can also use the Lightning Stilleto as a ranged attack that deals AoE Electro DMG when hit by your Charged Attack.

Stellar Restoration is also an effective tool for exploration. This allows her to climb small cliffs painlessly, go over obstacles, and even reach areas that would be otherwise much more difficult to access.

Her Elemental Burst, Starward Sword, unleashes a quick and devastating series of Electro slashes in an AoE, with the final strike dealing AoE Electro DMG.

This makes her very effective against enemy mobs, especially in Domains like the Spiral Abyss. This is also very useful during boss fights, helping you deal high damage without getting damaged.

Land's Overseer allows Keqing to complete Expeditions in a shorter amount of time. This comes in handy when mining for ores or gathering resources.

How to Get Keqing

While her limited banner has ended, Keqing is available as a 5-star character on the Standard Banner and in other character banners.
Wanderlust Invocation Banner Guide

How to Get Keqing's Character Skin

Keqing's Lantern Rite Event character skin, Opulent Splendor can be bought from the shop with 1680 Genesis Crystals. It was part of the Lantern Rite Skins that came with Ningguang's Orchid's Evening Gown in the Fleeting Colors in Flight Event!

See more comments (98 Comments)
Opinions about an article or post

In order for us to make the best articles possible, share your corrections, opinions, and thoughts about 「Keqing Rating and Best Builds | Genshin Impact」 with us!