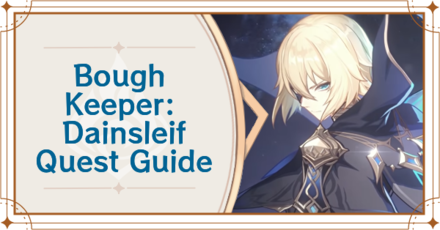 Bough Keeper: Dainsleif is a World Quest in Genshin Impact. Learn how to unlock this Quest and where it is found, as well as its rewards and a full walkthrough for completing the Quest.

This quest is available after Version 1.3 Update is released on February 3, 2021.

Dainsleif is a character that was revealed even before the release of Genshin Impact, but since then no mention of him in-game has been found.

Katheryne of the Mondstadt Adventurers' Guid seems to have something to tell you.

During this World Quest you will be fighting a lot of the Abyss Order, which include Hilichurls, Sawachurls, Mitachurls, and even Abyss Mages.

Make sure to have a well rounded party to be ready for any element and enemy.

At the very end of the quest, you see the tracks of a Ruin Guard and a Dandelion with the trace of your lost sibling. This is exactly what is shown in the We Will Be Reunited Story Teaser on the official YouTube channel.

Dainsleif Traveled with Your Sibling

It's also strongly hinted that Dainsleif used to travel with the Traveler's sibling hundreds of years ago, suggesting that Lumine and Aether might have been split up both physically and in timelines.

In order for us to make the best articles possible, share your corrections, opinions, and thoughts about 「Chapter 1: Act 4 - Prelude Story Walkthrough | Bough Keeper: Dainsleif World Quest Walkthrough and Rewards | Genshin Impact」 with us!