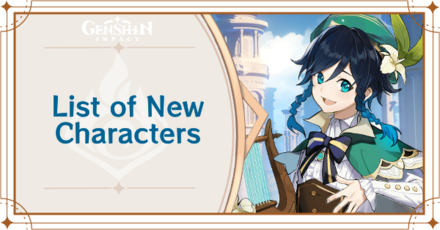 Genshin Impact's newest character in 2.8 is Heizou while Tighnari, Collei, and Dori are Version 3.0's upcoming characters. Read on to know the list of current, new, and upcoming playable characters as of August 2022, so you can plan and save your Primogems!

Heizou will become available at a normal rate in all active banners, except for the Beginner's Wish, after Version 2.8 ends.

It was confirmed in the Version 3.0 Livestream that Tighnari, Collei, and Dori will officially be released in Version 3.0 once Sumeru is here! The Dendro Traveler was also shown in a Sumeru Teaser Video.

Zhongli, Ganyu, and Kokomi were also confirmed to have reruns in Version 3.0! Zhongli's rerun will be in the first phase alongside Tighnari, while Ganyu and Kokomi will have simultaneous reruns during Phase 2 of Version 3.0.

Characters from the Sumeru Preview Teaser

Genshin Impact released Part 3 of the Sumeru Preview Teaser videos on youtube on July 29, 2022! The video featured several Sumeru characters that the Traveler will encounter and may become playable in future versions!

Characters That Appear in the Story

Which Character Do You Want to See Next?

In order for us to make the best articles possible, share your corrections, opinions, and thoughts about 「New and Upcoming Playable Characters (Version 2.8) | Genshin Impact」 with us!