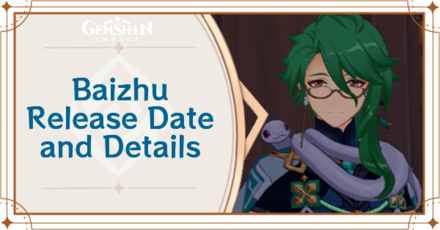 While we know Baizhu possesses a Dendro vision, there are no official info about his rarity and weapon yet. He might be a Catalyst user as it has been said that he's frail, which implies that he cannot use physically taxing weapons like a Claymore or Polearm!

What weapon do you think Baizhu will have? Feel free to discuss in the comments section below!

Little is known about Baizhu's release date, and there has been no mention of him in the latest Version Livestream. Because Dendro will most likely arrive with Sumeru, the Dendro region, we might expect him to release around this time!

Doctor of the Bubu Pharmacy

According to in-game dialogues, Baizhu is a skilled doctor and also the boss of the Bubu Pharmacy located in the northern part of Liyue. Other characters describe Dr. Baizhu as someone who uses traditional herbal medicine to cure ailments. 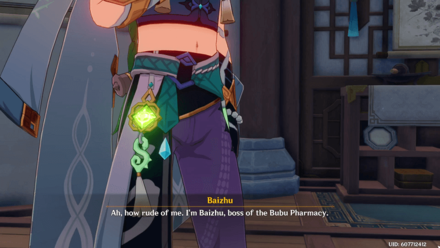 Baizhu can be seen with his green vision in a cutscene during the Chapter 1: Act 2 of the story while talking to Qiqi inside Bubu Pharmacy.
Chapter 1: Act 2 Story Walkthrough

In order for us to make the best articles possible, share your corrections, opinions, and thoughts about 「Baizhu Release Date and Details | Genshin Impact」 with us!