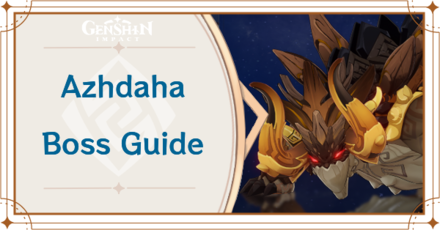 Azhdaha is a weekly Genshin Impact boss located in Mt. Hulao, Liyue. See the best team and characters for beating Azhdaha, and check out our tips for clearing the boss challenge!

The key to avoiding damage and defeating Azhdaha easily is the presence of good shields! Use characters that can generate shields and protect you while you attack Azhdaha.

Three shielded characters will ensure that your characters don't get knocked out during the Trounce Domain. Geo Resonance also boosts damage output while shielded, and Cryo Resonance increases CRIT rate against Azhdaha while he's affected by Cryo.

All the Best Characters for Azhdaha

Similar to the Primo Geovishap, Azhdaha can change into different elements. Azhdaha will use 2 elements when you fight him, so make sure you have a team that can counter each element.

Azhdaha's elemental forms will be fixed until the next weekly server reset on Monday. 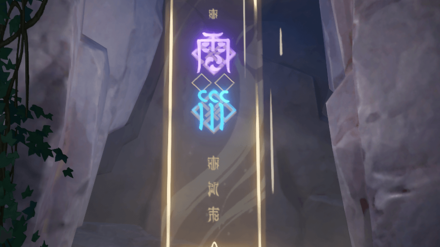 The Trounce Domain Door that leads to the Azhdaha Boss Fight shows colored signs that indicate which elements Azhdaha will be using in the boss fight.

Use characters with shields 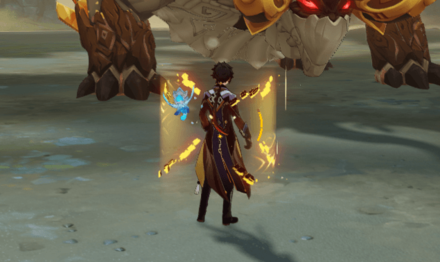 Azhdaha's attacks deal great damage when they hit, and can knock your party members out easily. To counter this make sure you have at least one character that can generate Shields.

Keep in mind that Geo structures are usually destroyed instantly, as Azhdaha's movements and attacks are powerful enough to take them out with one hit.

Check the ground for incoming attacks 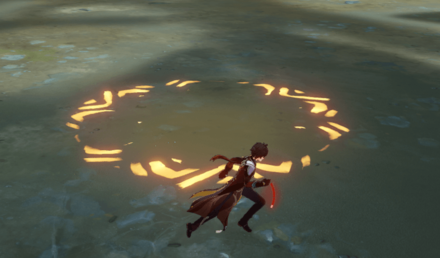 Most of Azhdaha's attacks involve signs that can be seen on the ground. You can use those signs as signals to move away and avoid getting damaged.

Move away when Azhdaha absorbs energy 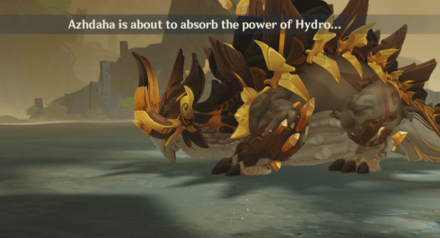 If you see a warning that Azhdaha is about to absorb energy, it means it will move on to its next phase.

It also means he will do multiple unblockable attacks around him. Stay far away from him when you see the warning, so the attacks won't reach you.

Similar to the Primo Geovishap, Azhdaha has a burrow attack that prevents it from getting damaged while still being able to damage the player. It's best to keep track of Azhdaha's movement on the ground to avoid the attack.

The second variation of the Burrow Attack allows Azhdaha to charge at the player while underground. Make sure to dodge at the right time to avoid taking too much damage!

Azhdaha unleashes a series of exploding Geo Rock Pillars, dealing AoE DMG. The pillars have a marker on the ground before they drop, so keep an eye on that to avoid them.

Azhdaha jumps up in the air and drops down, dealing AoE DMG. This has a huge range, so make sure you have your shields up!

This is another AoE attack that creates multiple shockwaves. Keep your distance as Azhdaha stomps on the ground, as the attacks can stun your character and lock you in place.

Azhdaha charges swiftly at the player during this attack. Timely dodges will help you avoid this attack and prevent you from getting crushed.

This ranged attack allows Azhdaha to damage you from a distance and knock you back. Always be wary when it raises its head because that usually indicates the start of the attack.

This wide-ranged AoE attack deals massive damage multiple times in a row. Be sure to stay as far away as possible form this attack, as this can knock your characters out even if they have a shield! 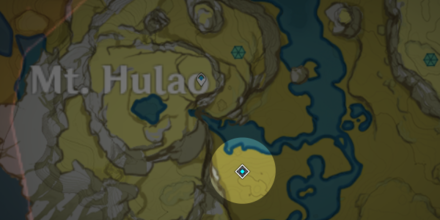 Azhdaha's Trounce Domain is found in Mt. Hulao, Liyue. You will only be able to access it after completing Zhongli's Story Quest: Act II.

In order for us to make the best articles possible, share your corrections, opinions, and thoughts about 「Azhdaha Boss Fight Guide | Genshin Impact」 with us!