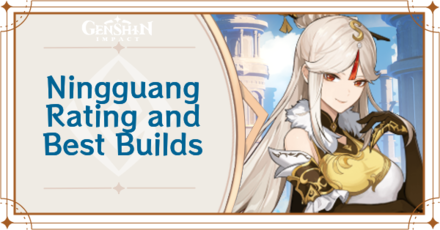 Ningguang is a 4-star Geo Catalyst character in Genshin Impact. Learn about Ningguang's stats, strengths and weaknesses, Japanese voice actor, best weapon and builds, and our rating of the character in this complete profile!

Ningguang gains 7 Star Jades when she uses her Elemental Burst with C6, increasing overall DPS afterwards. Ningguang's C2 also resets Elemental Skill CD when the Jade Screen is destroyed, giving you more chances to use it for support or energy.

How to Get Ningguang

Ningguang is available at a normal rate on all Standard Wish Banners except Beginner's Wish. This means you can get her from Wanderlust Invocation, Epitome Invocation, and the current Character Event Wish.

As a 4-star character, Ningguang has a chance to appear in the Starglitter Exchange every month. She can be traded for 34 Masterless Starglitter.

Best Artifacts and Weapons for Ningguang

How to Use Ningguang

A good way to maximize Ningguang's DMG is to hit an enemy twice with Normal Attacks then follow up with a Charged Attack, this will give Ningguang the maximum amount of Star Jades while also decreasing the time between each Charged Attack.

Placing the Jade Screen strategically can block off the ranged attackers, while letting you focus on the nearby melee opponents. If timed and placed well, you can also block some strong enemy and boss attacks.

Using the Jade Screen and then switching to a Bow class character is also a good way to pick off ranged enemies with no worry of getting hit back.

When the Jade Screen is summoned, enemies nearby will get knocked back and they will take a burst of Geo DMG. This can be used to create some space to counter-attack.

After unlocking the Strategic Reserve passive, anyone who walks through the Jade Screen will receive a 12% Geo DMG bonus. A good strategy is to use your shield immediately and walk through it before attacking or using her Burst for an increase in DMG.

The Geo DMG bonus not only applies to Ningguang, but to any character who walks through it. Making her a nice addition to a team with other Geo characters.

Ningguang's Starshatter releases Star Jades that lock on enemies dealing a lot of Geo DMG when used. Additional Star Jades will be fired when it's used near a Jade Screen.

You can increase and maximize Ningguang's DMG by placing a Jade Screen nearby and walking through it before using Starshatter.

Trove of Marvelous Treasures, Ningguang's exploration passive, marks nearby Ore locations on the minimap making it easy to find and farm as long as she's in your party. Since Ores are used to produce and level up your weapons, it's an item you definitely don't want to miss out on.

Ningguang's Normal and Charged attacks can also be used to mine ores quickly as well, making her a good choice for Ore farming.

How to Get Ningguang's Character Skin

You can get Ningguang's Lantern Rite character skin, Orchid's Evening Gown, by buying it from the shop for 1680 Genesis Crystals!

It was previously obtainable for free in the Fleeting Colors in Flight Event where you needed to complete the conditions for The Moon's Comely Brow to get it.

See more comments (43 Comments)
Opinions about an article or post go here.
Opinions about an article or post
We at Game8 thank you for your support.
In order for us to make the best articles possible, share your corrections, opinions, and thoughts about "Ningguang Rating and Best Builds" with us!
When reporting a problem, please be as specific as possible in providing details such as what conditions the problem occurred under and what kind of effects it had.