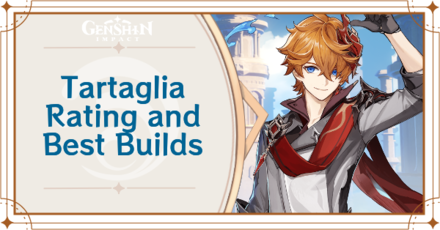 This is Tartaglia's best build thanks to the effects of the Heart of Depth which allows him to have increased Normal and Charged Attack DMG after using his Elemental Skill.

A lot of Tartaglia's DMG will come from his Elemental Skill, so prioritize in leveling that up followed by your Elemental Burst. Level up your Normal Attacks if you use Tartaglia's Charged Shots as his Normal Attack Talent multipliers do not affect his Melee Stance.

All Recommended Weapons for Tartaglia

Tartaglia works well with Xiangling as he can keep the enemy affected by Hydro while Xiangling deals off-field Elemental Burst DMG to enemies. Bennett can provide Healing, ATK buffs, and acts as Xiangling's battery while Kazuha can increase Elemental DMG.

Tartaglia can function as the main Hydro applier in any Bloom team comp, whether if it's Fridge teams, Hyperbloom, or Burgeon. His damage may be lower compared to a standard vaporize Team comp, but his teammates will make up for it.

How to Use Tartaglia (Childe)

Tear Through Mobs with Riptide

The key to maximizing damage with Tartaglia is applying his unique debuff, Riptide.

Depending on how Tartaglia triggers the effects of the Riptide mark, Tartaglia will deal additional instances of Hydro DMG.

Hitting enemies marked with Riptide will trigger independent instances of Riptide Slashes. This means that all marked enemies in close proximity will unleash a barrage of AoE Hydro DMG, and if defeated, will trigger Riptide Bursts too!

Try to group enemies as much as possible to exponentially increase Tartaglia's DPS. You can easily do this by using Anemo characters with grouping crowd control skills like Kazuha or Sucrose.

Recommended to Stay in Melee Stance for Around 10-15 Seconds

It is recommended to stay in Melee Stance for around 10-15 seconds at maximum so that your Elemental Skill cooldown would not go beyond 20+ seconds.

This synergizes well with the artifact buff duration of Heart of Depth, and weapon effects of bows like Thundering Pulse. 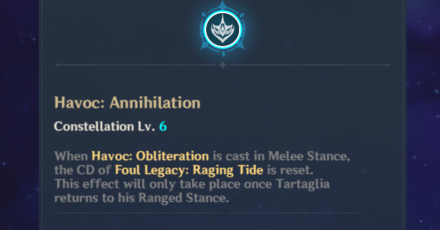 This can only be done after returning to bow stance, which means your melee stance will always be up after using your melee Elemental Burst.

How to Get Tartaglia

See more comments (108 Comments)
Opinions about an article or post

In order for us to make the best articles possible, share your corrections, opinions, and thoughts about 「Tartaglia (Childe) Rating and Best Builds | Genshin Impact」 with us!