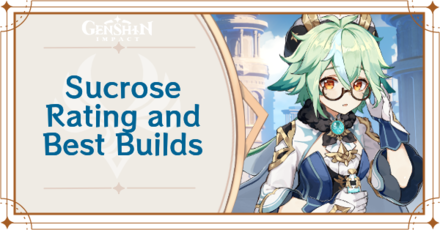 This Sucrose build allows you to use Sucrose as an on-field Swirl reactor. This is recommended on teams that use Electro-charged and Overload reactions.

This Sucrose build is her best build that specializes in buffing your party's Elemental Mastery while also decreasing the enemies' Elemental RES.

When building Sucrose's talents, prioritize on leveling up her Elemental Skill as it's her most used talent when she's in your party. Afterwards, level up either her Normal Attack or Elemental Burst depending on whether she will be a Sub-DPS or Support respectively.

All Recommended Weapons for Sucrose

Since Sucrose wants as much Elemental Mastery as she can get, having C1 can help Sucrose regain energy for her Elemental Burst. If you have Sacrificial Fragments, you'll only need to put Energy Recharge on your substats instead!

How to Use Sucrose

Sucrose specializes in boosting Elemental reactions with Anemo. Due to her Passive Talent, Mollis Favonius, using Sucrose's Elemental Skill or Burst will buff all other party member's Elemental Mastery by 20% of her own. This allows you to set up bigger, more potent Elemental Reactions with Sucrose!

In addition to this, Sucrose can group most enemies together for easier combat!

Since Sucrose's Elemental Skill uses charges similar to Klee, gaining the Elemental Mastery boost from her passive is not as dependent on the skill cooldown time as it can be triggered with each charge as well as her Elemental Burst.

We recommend this tactic for a party that has Pyro, Hydro, Cryo, and Electro characters as members!

Use When Crafting Weapon Enhancement Materials

Sucrose Does Not Buff Kazuha

However, according to the June 30, 2021 Developer's Discussion, this buff does not apply to Kazuha, as the only exception. It was explained that this is to avoid infinite stacking of stat bonuses.

How to Get Sucrose

Sucrose is available at a normal rate on all Standard Wish Banners except Beginner's Wish. This means you can get her from Wanderlust Invocation, Epitome Invocation, and the current Character Event Wishes.

See more comments (31 Comments)
Opinions about an article or post

In order for us to make the best articles possible, share your corrections, opinions, and thoughts about 「Sucrose Rating and Best Builds | Genshin Impact」 with us!