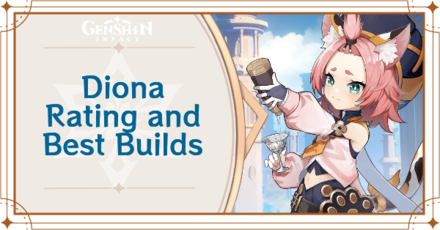 This build utilizes Diona as a buffer thanks to the Noblesse Oblige artifact set. This set is recommended if you currently don't have anyone else in the party who uses Noblesse Oblige.

This Diona build specializes on pure support from healing and providing a shield to the party. This build is especially vital if you want Diona's Elemental Burst to be ready as soon as you can.

Diona's Elemental Skill and Elemental Burst are both essential in keeping your party members alive, so level them up to increase their effectiveness. We don't recommend leveling up her Normal Attack talent as it's not necessary and the DMG is very lackluster.

All Recommended Weapons for Diona

Diona can function in almost any Cryo team comp to function as a shielder, healer, and a battery tp recharge the energy of the Cryo Main DPS.

Similar to the freeze team, Diona functions as a shield and healer unit for Physical team. In this example Diona provides Energy for Eula's high Elemental Burst cost while protecting Eula with a shield while she deals damage.

Diona is also an excellent support for any Freeze + Dendro core type team comps. Diona can freeze enemies who have Hydro applied to them since Dendro does not interact with cryo. At C6, she can further improve Bloom damage from her Elemental Burst.

For players willing to invest a little bit more for Diona, unlocking her first constellation is a good stopping point. Her Elemental Skill already provides 4 Elemental Particles, so adding a buff that gives her 15 energy after using her burst will help keep it consistently used after cooldown.

C2 is Great for Co-op

C6 Can Be Amazing

On paper, her C6 can be an amazing utility that she provides. However, it can be somewhat tricky to take advantage of this.

Her Elemental Burst applies Cryo on enemies via pulses, so it can mess with certain Elemental Reactions that your Main DPS should have otherwise been the one to create.

How to Use Diona 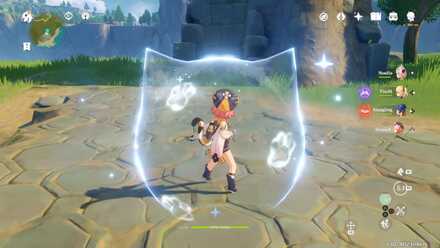 Diona's Elemental Skill Icy Paws allows her to launch projectiles that deal damage, while also creating a shield for protection.

The duration of her shield is based on the number of Icy Paws that hit an enemy. Keep in mind that you can press or hold her elemental skill, which means you can hold it to launch more Icy Paws and create a better shield.

The amount of damage that her shield can absorb is based on her max HP, which is why it is best to get artifacts that focus on boosting her HP.

Shields for Nearby Characters Unlocked at C2

Upgrading to Constellation Level 2 allows her to create shields for nearby characters, making it an effective support skill during co-op play. 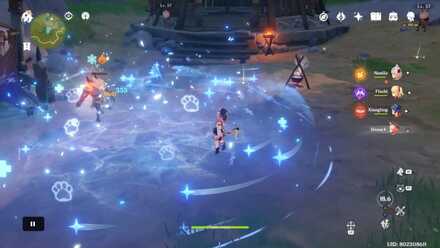 Her Elemental Burst, Signature Mix, creates an AoE that deals Cryo damage to enemies within the area and heals characters at the same time. The area that the burst covers is wide, making it great against huge enemy mobs, and set up Elemental Reactions. 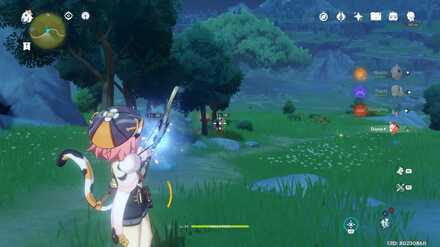 Diona's supportive abilities make her a great character to have in your party. As such, it is recommended to build her as a support, who can protect other characters in the field and potentially create Elemental Reactions.

How to Get Diona

Diona is available at a normal rate on all Standard Wish Banners except Beginner's Wish. This means you can get her from Wanderlust Invocation, Epitome Invocation, and the current Character Event Wishes.

In order for us to make the best articles possible, share your corrections, opinions, and thoughts about 「Diona Rating and Best Builds | Genshin Impact」 with us!