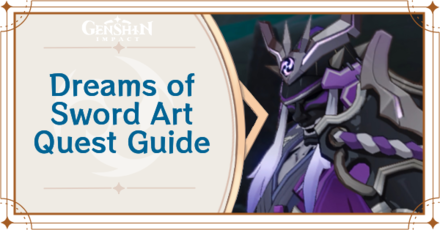 Dreams of Sword Art is a World Quest in Genshin Impact. Learn how to unlock this Quest and where it is found, as well as its rewards and a full walkthrough for completing the Quest.

A nameless samurai stands atop the windy sea cliff, seemingly searching for something...

The fourth time you fight with Masanori, he will go into berserk mode when you deplete his health. His HP will be refilled and he will deal more Electro damage during his berserk phase.

After completing the quest, you can talk to Masanori again at any time to spar with him. Sparring with him has no rewards, but it is a good practice and way of testing out new builds, weapons, and characters.

Defeating Masanori within 30 seconds will award the Oowazamono Achievement, which gives 5 Primogems!
Achievement List and Rewards

Register as a member and get all the information you want. (It's free!)
Login
Opinions about an article or post go here.
Opinions about an article or post
We at Game8 thank you for your support.
In order for us to make the best articles possible, share your corrections, opinions, and thoughts about "Dreams of Sword Art World Quest Walkthrough and Rewards" with us!
When reporting a problem, please be as specific as possible in providing details such as what conditions the problem occurred under and what kind of effects it had.