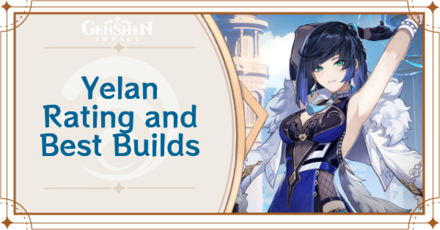 This Main DPS Yelan build focuses on maximizing her Skill, Burst, and Barbed Charge Attack DMG. It's a very generalist set that can also be used as a Sub-DPS build. The Tenacity of the Millelith can also be swapped with the Emblem of Severed Fate.

This Sub-DPS Yelan build focuses on improving her Elemental Burst DMG. Depending on your team comp, you might feel the need to use Energy Recharge weapons to reach a target goal of 180% - 200%+ ER.

This support build aims on improving the overall damage of the team with the Noblesse Oblige 4pc. effect. This is only recommended if your party needs the 20% ATK boost.

Depending on Yelan's Role, her Normal Attack will have higher priority than her Elemental Skill. However, her Elemental Burst is undoubtedly one of her highest DMG sources and should be prioritized.

All Recommended Weapons for Yelan

Yelan excels at the role of Sub-DPS but can have respectable DMG as a Main DPS with the proper teammates.

This Yelan Team Comp focuses on enabling Yelan to use her Elemental Burst off cooldown whenever she enters the field. Yelan does not need a lot of ER for this build, but Xingiqu will need to use the Sacrificial Sword to make it work well.

This team comp focuses on creating Electro-Charge reactions but with the added benefit of having a healer. If Sucrose with the Viridescent Venerer is unavailable, consider using Bennett or any Geo Support.

Yelan in this Sub-DPS team comp teams up with Xingqiu to provide a lot of Hydro for Hu Tao to trigger Vaporize. Yelan not only provides Hydro application, but also having the added benefit of increasing Hu Tao's DMG!

This classic team replaces Xingqiu with Yelan as the character who hails from Liyue. What's great about this build is that Yelan can provide amazing DPS while Raiden's Elemental Burst is on cooldown.

Yelan can serve as both an off-field and on-field Hydro DPS for different Bloom teams with a double Hydro resonance that helps to increase her damage.

Yelan's 70 Energy cost for her Elemental Burst can become a hindrance on teams that can't feed her Elemental Particles. Unlocking C1 for her will greatly help with refilling her own Energy!

How to Use Yelan

When Yelan is off-field, she will enter a Breakthrough state. Breakthrough allows her to have a huge decrease in her Charged Attack cooldown and deal AoE Hydro DMG to enemies.

Yelan's talents scale on the HP stat. This makes all the HP% substat artifact pieces we got become actually useful!

On the Hunt with Elemental Skill

Yelan's Elemental Skill, Lingering Lifeline, lets Yelan speed up. Touching enemies will mark them Lifeline, which will explode and deal Hydro DMG once the skill has ended.

How to Get Yelan

There is currently no way to get Yelan from active Wish Banners. Yelan's release banner, Discerner of Enigmas, was active from May 31, 2022 to June 21, 2022. Her banner ran at the same time as Xiao's Rerun Banner for the first half of Version 2.7! 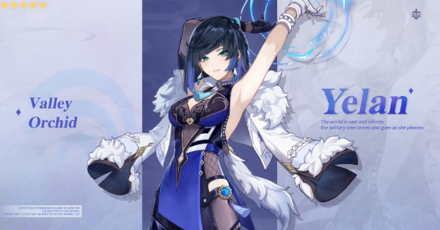 Yelan claims to be associated with the Ministry of Civil Affairs, but is considered as a ''non-entity'' on their list. Yelan has been said to go by different names and identities, making her one of the most mysterious people in Liyue so far.

Yelan was officially released as a playable character during the first phase of Version 2.7 on May 31, 2022.

See more comments (113 Comments)
Opinions about an article or post

In order for us to make the best articles possible, share your corrections, opinions, and thoughts about 「Yelan Best Builds and Rating | Genshin Impact」 with us!