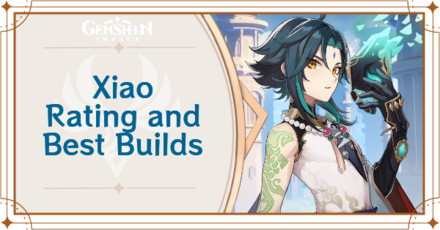 Xiao's best build will have him use the Vermillion Hereafter artifact set. Xiao's abilities let him easily trigger and maximize the 4pc. effect.

Any 2PC. ATK +18% and 2PC. Anemo DMG Bonus +15% Artifact Set combo is an effective and simple way to build Xiao. With amazing substats, the only reason to farm for a good Vermillion Hereafter set is to min-max your damage.

Xiao's Normal Attack Talent and Elemental Burst should be leveled up equally to deal a lot of Plunging Attack DMG as possible. Don't forget to upgrade your Elemental Skill as well if you want to deal more DMG.

All Recommended Weapons for Xiao

Faruzan is a welcome addition to Xiao's party thanks to her Anemo DMG buffs. If Faruzan is below C6, you may need another Anemo character like Jean or Sucrose to fill up Xiao's energy easily.

If Faruzan is C6, then your Xiao team can survive without additional Anemo batteries and use Zhongli and Bennett to furtherly increase your DPS.

This team comp synergizes well with keeping Xiao safe as he deals damage with his Elemental Burst. Jean will provide particle generation for Xiao's Elemental burst and can also increase his DPS if she has her 4th Constellation unlocked.

This is a Xiao's Best Team Comp that involves four stars and is overall a lot cheaper to build. Sucrose provides a lot of Anemo Energy for Xiao, while Bennett provides healing and ATK buffs for Xiao to take advantage of.

Xiao's C1 primarily gives you an additional charge on your Elemental Skill, but it also helps with your Energy regeneration as Xiao's burst cost is high. Make sure to use Xiao's Skill outside of Burst because it won't generate any energy otherwise!

Xiao's playstyle will be upgraded into a much stronger Plunge Attack + Elemental Skill combo.

How to Use Xiao

Xiao's Elemental Skill, Lemniscatic Wind Cycling, is his high mobility dash that deals Anemo damage in a straight line up to 2 times. This can also be used in midair as an air dash and can set up a Plunge Attack.

Use this skill to extend Normal Attack combos, gap close on distant enemies, dash through attacks to dodge, or as an air dash outside of combat.

Use a Plunge Combo

By jumping and using his Elemental Skill, then immediately tapping the attack button, you can plunge towards your enemy. Use this combo to close the distance!

Since Lemniscatic Wind Cycling can be used in midair, this makes it useful in exploration. While gliding, you can cover a lot of distance towards your destination with this!

Can Slightly Save Stamina

You can also use his skill to restore a small amount of stamina while climbing, making it even handier during exploration.

Xiao's Elemental Burst, Bane of All Evil, greatly boosts his Attack damage, imbues his Normal Attacks with Anemo, and drastically increases his jump height about four times allowing for easily repeatable Plunge Attacks at the cost of HP over time.

Using a double jump as soon as Xiao lands from his plunge attack will cancel his landing animation and immediately launch him back into the air. Use this animation cancel to maximize the number of plunge attacks during Bane of All Evil!

Bane of All Evil

Conqueror of Evil: Tamer of Demons

How to Get Xiao

Xiao's banner, Invitation to Mundane Life is available in Phase 1 of Version 3.4 from January 18, 2023 until February 7, 2022. His banner runs alongside Alhaitham's banner, Caution in Confidence.

Yaoyao, Xinyan, and Yun Jin are the featured 4-star characters in both Phase 1 Banners.

See more comments (122 Comments)
Opinions about an article or post

In order for us to make the best articles possible, share your corrections, opinions, and thoughts about 「Xiao Best Builds and Artifacts | Genshin Impact」 with us!