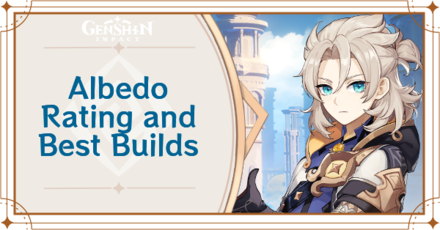 Sub-DPS and Support Builds for Albedo

This Albedo build utilizes the effects of the Husk of Opulent Dreams artifact set, which buffs Albedo's DEF and Geo DMG, both stats that increase his Elemental Skill DMG.

If you want Albedo to be in a Support role, just use the Tenacity of the Millelith artifact set which allows him to increase the party's ATK. Keep in mind that Albedo won't benefit much from the ATK buff as his talents don't benefit well from ATK.

You should prioritize on levelling up Albedo's Elemental Skill as most of the DMG he deals comes from that talent. Afterwards, level up his Elemental Burst for even more DMG.

We don't recommend on levelling up his Normal Attack talent unless you plan on using Albedo on-field.

All Recommended Weapons for Albedo

C2 increases your Elemental Burst the more DEF you have. This also makes DEF% more desirable for Albedo than split chasing for ATK.

How to Use Albedo

Albedo is a master of supplemental damage and his Elemental Skill, Abiogenesis: Solar Isotoma should always be active to optimize his damage potential.

Since Solar Isotoma is a Geo Construct it can be placed in advance of a fight, such as a Ley Line Blossom or Domain, and its low CD allows it to be moved easily. 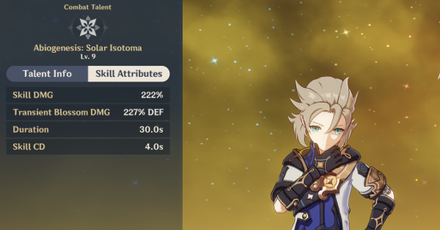 No, Albedo's Transient Blossoms scale in DEF and only DEF. If you want to maximize Albedo's Elemental Skill DMG, you will need to invest in DEF stats in your artifacts or weapon.

The initial damage of Albedo's Elemental Skill when he places the flower still scales in ATK, but its Blossom effect can only scale with DEF.

Placement of Solar Isotoma is important when fighting Boss enemies as it will be destroyed instantly if placed directly on them. If you plan to use Albedo in a boss fight, try to position the construct to the around the Boss to minimize the chance of it being destroyed.

After using Albedo's Elemental Burst, all characters in your party will automatically receive a 125 Elemental Mastery bonus for a few seconds. Swapping from Albedo to a party member to trigger an elemental reaction will ensure massive reaction damage.

A Home for DEF Stat Artifacts 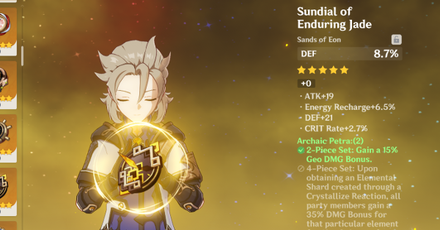 Similar to Noelle, Albedo can take advantage of the unwanted artifacts that have DEF as the main stat, as his skills scale with his DEF. A usually unwanted artifact for other characters, might actually be the perfect match for Albedo!

Albedo has a 10% chance to double the out come of the weapon material you are crafting. This effect can be extremely useful if you are lacking resources or when crafting multiple weapon materials.

How to Get Albedo

Albedos rerun banner was on October 14, 2022 during the second Phase of Version 3.1! Nilou, a new 5-star Hydro Sword character, was also be available as a rate-up character in her own banner during this time.

The featured 4-Star Characters on both banners are Barbara, Beidou, and Xiangling!

See more comments (104 Comments)
Opinions about an article or post

In order for us to make the best articles possible, share your corrections, opinions, and thoughts about 「Albedo Rating and Best Builds | Genshin Impact」 with us!