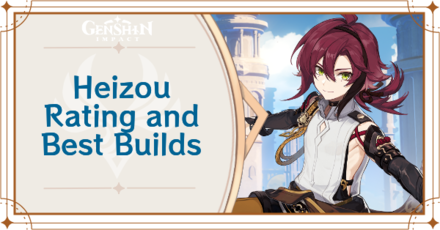 Shikanoin Heizou is a 4-Star character in Genshin Impact. He uses an Anemo Vision and a Catalyst. Check out this guide for Heizou's best builds, best teams, best weapons and best artifacts!

Heizou's best builds are the same whether you're using him as a Main or Sub DPS. If you're fighting multiple enemies, we recommend an EM Swirl Build to deal Swirls in an AoE. If only fighting a few enemies, the CRIT Build is best to use.

This Main DPS Heizou Build will focus on doing Swirl DMG and spreading Elemental Reactions. This build does the most DPS and works best against multiple enemies. Heizou's strength comes from his role as a driver to enable off-field characters to deal more DMG.

The standard ATK%-Element-CRIT build prioritizes Crits than Swirls. Heizou with this DPS build works best against single target enemies, with only a minor difference in DMG compared to the Triple EM mainstat build.

Heizou's best Artifact is the Viridescent Venerer set to increase Swirl damage and debuff enemies. This is still recommended to use if you're using a CRIT build.

Unlike Xiao, a major part of his damage comes from swirl damage. Generally, equipping a 2pc. Viridescent and a +18% ATK artifact set will lead to lower team and personal damage.

All Recommended Weapons for Heizou

This Heizou team comp focuses on Swirling Electro and Hydro Reactions. Shinobu can be replaced with Fischl to help with Elemental Particle generation.

This Heizou F2P team focuses on Swirling Electro and Hydro Reactions while also providing Heizou with shields and DMG resistance. Fischl can or Beidou can be swapped out with Shinobu if you need healing.

A strong classic team comp with Heizo acting as the Main DPS in the party. This Heizou team comp has strong Hydro and Pyro application which can help with triggering multiple Vaproize reactions.

C0 is Perfectly Fine for Heizou

Heizou at C0 is a very solid character. None of his Constellations drastically change his playstyle, nor are any of them needed to make him a good Main DPS.

How to Use Shikanoin Heizou

Heizou's is a Catalyst user who attacks enemies with Anemo-infused fists and kicks. He works when spreading Elemental Reactions from his off-field teammates!

Charge and Punch with Elemental Skill

Heizou's Elemental Skill, Heartstopper Strike, unleashes a powerful punch that can knockback opponents. Holding his Elemental Skill charges it and increases the power of its damage, via a mechanic called the Declension effect.

No need to hold!

Blast and Pull in Enemies with Elemental Burst

Heizou jumps and kicks a ball of Anemo for his Elemental Burst, Windmuster Kick. Enemies affected with an Element will receive a follow up explosion DMG. Just be careful how you aim it, since the ball explodes on the enemy it hits!

How to Get Heizou

Heizou is currently a rate-up in Tartaglia and Yae Miko's rerun banners in the second phase of Version 3.2. It runs from November 18, 2022 until December 6, 2022! Thoma, and the new 4-star Cryo character, Layla, are also on rate-ups in Phase 2.

You can also get Heizou on all Standard Wish Banners except Beginner's Wish!

Who is Shikanoin Heizou? 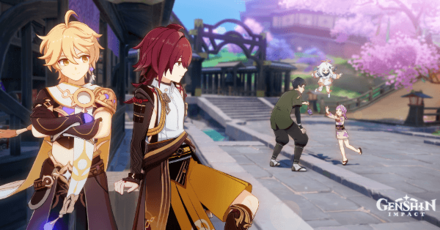 Heizou is the number one detective of the Tenryou Commission. He's been offered promotions multiple times for his achievements, but chooses not to accept them since he believes that staying close to the front lines means intimidating criminals from his name alone.

Heizou was officially released as a playable character during the first phase of Version 2.8 on July 13, 2022.

See more comments (149 Comments)
Opinions about an article or post

In order for us to make the best articles possible, share your corrections, opinions, and thoughts about 「Shikanoin Heizou Best Builds and Teams | Genshin Impact」 with us!