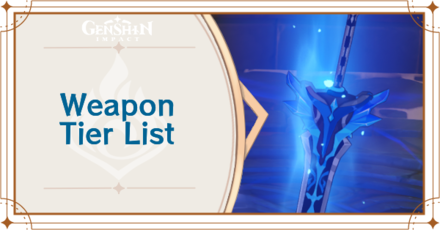 Welcome to Game8's Weapon tier list for Genshin Impact for Version 3.4! Check out the best Swords, Claymores, Polearms, Catalysts, and Bows, as well as the best weapons for Main DPS, Sub-DPS, and Support roles.

The Light of Follar Incision is the newest 5★ sword released in Genshin Impact. It is Alhaitham's Signature weapon and is great for Main DPS units who can infuse their attacks with an element.

Emphasis on Boosting Attack DMG and Skill DMG for DPS

Weapons for the DPS category are ranked based on their ability to not only raise the Normal and Charged Attacks but also the damage from skills as well.

Sub-DPS weapons are focused on improving the effectivity of Elemental Skills and Bursts, whether it be increasing the damage or decreasing cooldowns.

For most Support characters, the effectivity of their skills and bursts depend on their HP the buffs they give. Increasing Energy Recharge will also make sure that you can use your Elemental Skills and Bursts as quickly and as often as possible.

Depends on Number of Characters That Use It

Some weapons may have rankings for multiple categories depending on it's versatility. A weapon might rank highly for the DPS category but not rank at all for the Support category, or vice versa.

Weapon Roles That Change Due To A Character Not Ranked

Weapons that change roles or categories when an individual character uses them won't be ranked as such. For example, the Sacrificial Greatsword is a Sub-DPS weapon but can be used as a Main DPS weapon if used on Diluc still won't be ranked in the DPS category.

In order for us to make the best articles possible, share your corrections, opinions, and thoughts about 「Weapon Tier List | Best Weapons of All Types | Genshin Impact」 with us!