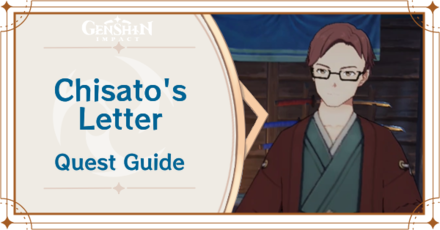 Chisato's Letter is a World Quest in Genshin Impact. Learn how to unlock this Quest and where it is found, as well as its rewards and a full walkthrough for completing the Quest.

To unlock this quest, you first need to complete The Ritou Escape Plan quest.

The quest Ritou Escape Plan is part of the Chapter 2: Act I Archon Quest. You can only unlock this quest after you finish that part of the Quest!

The Immovable God and the Eternal Euthymia Archon Quest

Chisato, lady of the Hiiragi Clan, which leads the Kanjou Commission, requests that you help her bring a letter to her sweetheart, Kujou Kamaji....

Use the Statue of Seven to Teleport 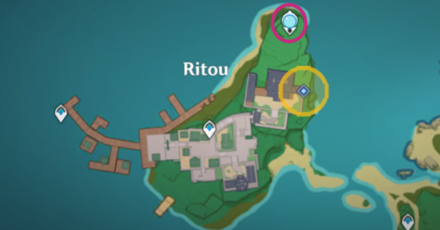 Get the Travel Permit Fast 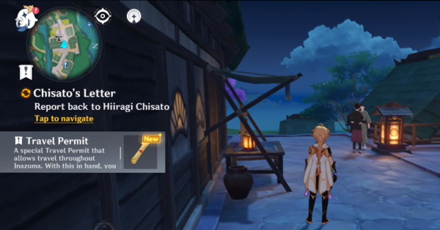 To make your exploration through the settlements in Inazuma easier, finish this quest so you don't get blocked while roaming around!

Register as a member and get all the information you want. (It's free!)
Login
Opinions about an article or post go here.
Opinions about an article or post
We at Game8 thank you for your support.
In order for us to make the best articles possible, share your corrections, opinions, and thoughts about "Chisato's Letter World Quest Walkthrough and Rewards" with us!
When reporting a problem, please be as specific as possible in providing details such as what conditions the problem occurred under and what kind of effects it had.