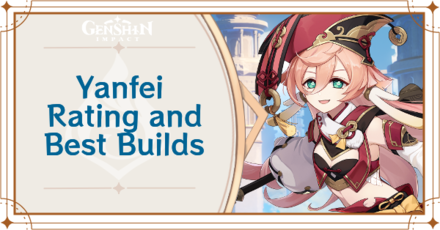 Yanfei is a 4-star Pyro Catalyst character in Genshin Impact. Learn about Yanfei's stats, strengths and weaknesses, Japanese voice actor, best weapon and builds, and our rating of the character in this complete profile!

How to Get Yanfei

Yanfei is available at a normal rate on all Standard Wish Banners except Beginner's Wish. This means you can get her from Wanderlust Invocation, Epitome Invocation, and the current Character Event Wishes.

Yanfei's Support Build can only be achieved when she is at Constellation 4, as she requires the constellation to trigger a shield.

Best Artifacts and Weapons for Yanfei

How to Use Yanfei

How to Enhance your Charged Attacks

Yanfei's Charged Attacks deal Pyro DMG in the area in front of her. If you manage to collect Yanfei's Scarlet Seals beforehand, her Charged Attack DMG and AoE will be increased. Try to gain the maximum number of Scarlet Skills before you unleash a Charged Attack!

Her Elemental Skill, Signed Edict, deals AoE Pyro DMG to surrounding enemies. This also gives her Scarlet Seals for every enemy hit (maximum of 3). This provides you with more attacking options, and allow you to deal more Charged Attacks.

Her Elemental Burst, Done Deal, unleashes a shower of flames that deal massive Pyro DMG. This also gives her the maximum number of Scarlet Seals, allowing her to deal a strong Charged Attack right away!

See more comments (66 Comments)
Opinions about an article or post go here.
Opinions about an article or post
We at Game8 thank you for your support.
In order for us to make the best articles possible, share your corrections, opinions, and thoughts about "Yanfei Rating and Best Builds" with us!
When reporting a problem, please be as specific as possible in providing details such as what conditions the problem occurred under and what kind of effects it had.