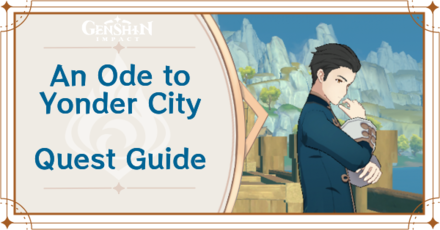 An Ode to Yonder City is a World Quest in Genshin Impact. Learn how to unlock this Quest and where it is found, as well as its rewards and a full walkthrough for completing the Quest.

An Ode to Yonder City can be unlocked after beating the A New Star Approaches Archon Quest and talking to Qingzhou in Wangshu Inn.

An Ode to Yonder City Walkthrough and Rewards

An Ode to Yonder City

Liyue's crisis has settled down, but it has brought a wave of change to the city. The poet Qingzhou would like to capture these shifts in verse...

An Ode to Yonder City Objectives 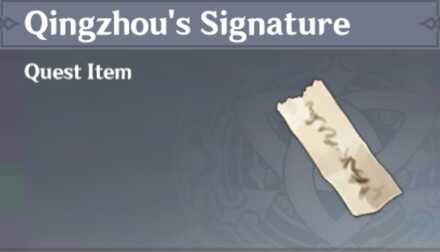 Another item you get as a reward after the quest is Qingzhou's Signature, which he says you can exchange at Wanmen Bookhouse in Liyue Harbor for a copy of his book once it comes out.

As of right now, you can't have it exchanged yet.

Register as a member and get all the information you want. (It's free!)
Login
Opinions about an article or post go here.
Opinions about an article or post
We at Game8 thank you for your support.
In order for us to make the best articles possible, share your corrections, opinions, and thoughts about "An Ode to Yonder City World Quest Walkthrough and Rewards" with us!
When reporting a problem, please be as specific as possible in providing details such as what conditions the problem occurred under and what kind of effects it had.