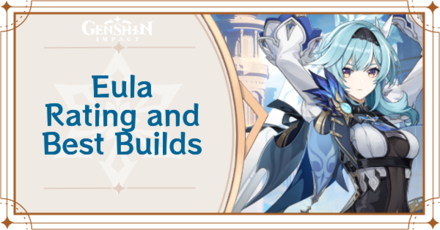 This Main DPS build for Eula is undoubtedly the best set for her. Activating the 4 set bonus will give Eula a total of +50% Physical DMG and a nice +18% ATK for this set alone.

Compared to her best set, this Main DPS build is only lacking an +18% ATK bonus. Depending on your substats, this can outperform her best Artifact set.

A huge chunk of Eula's Damage comes from her Elemental Burst and should be leveled up first. Without going into the nitty-gritty math, adding more damage to her Normal Attacks is generally more usefull than further reducing the enemy's Physical RES and Cryo RES below 0%.

All Recommended Weapons for Eula

Since Eula is primarily a Physical DMG character, unlocking C1 provides a huge overall boost to her DMG. Reaching C3 with her is also beneficial if you count the fact that most of her damage comes from her Burst.

How to Use Eula

A Claymore User With Quick Attacks

Compared to other Claymore users, Eula's Normal Attacks are quicker. This allows her to deal damage quickly while making her more agile and mobile during combat.

Eula's Elemental Skill, Icetide Vortex, can be pressed or charged, providing more options in combat. Pressing her Skill deals Cryo DMG, and gives her a stack of Grimheart. This increases her DEF and RES to interruption, allowing her to continue attacking without the risk of getting knocked down.

Holding her skill, on the other hand, consumes Grimheart and deals Cryo DMG to nearby enemies. This also lowers their Physical and Cryo RES, helping you deal more DMG.

Eula's Elemental Burst, Glacial Illumination, is an ability that deals Cryo DMG to surrounding enemies. Her Burst creates a Lightfall Sword that follows her around in battle.

Dealing DMG using her Normal Attack, Elemental Skill, and Burst will charge her Lightfall Sword and explode once the duration ends, which can clear mobs. Her Elemental Burst also increases her Physical DMG, allowing her to deal even more damage to enemies

Note that if you cast Eula's Elemental Burst and switch to another character, the Lightfall Sword will immediately explode.

How to Get Eula

Pull in the Born of Ocean Swell Banner

There is currently no way to get Eula from active Wish Banners. Eula's last rerun banner, Born of Ocean Swell, was active from November 24 to December 14, 2021 during Version 2.3.

See more comments (131 Comments)
Opinions about an article or post go here.
Opinions about an article or post
We at Game8 thank you for your support.
In order for us to make the best articles possible, share your corrections, opinions, and thoughts about "Eula Rating and Best Builds" with us!
When reporting a problem, please be as specific as possible in providing details such as what conditions the problem occurred under and what kind of effects it had.