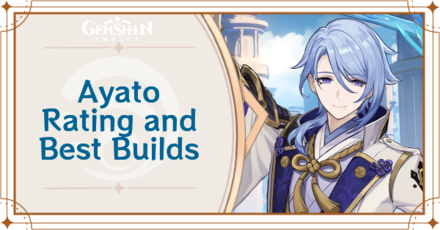 This Ayato build maximizes his Normal Attack damage. It uses the Echoes of an Offering artifact set for the damage boost so it's slightly RNG-dependent.

This Hydro-Focused DPS build lets Ayato deal more consistent damage and boosts the damage from his Elemental Skill and Burst as well.

This Sub-DPS build utilizes Ayato's Elemental Burst. His burst window will be used for buffing damage and setting up Elemental Reactions for the Main DPS.

Ayato's Elemental Skill and Burst are key talents that change leveling priority depending on the build. Ayato's Normal Attacks does not affect the damage when using his Elemental Skill, so it should be leveled last.

All Good Weapons for Ayato

Ayato is a very flexible character so we've prepared his four best parties.

Ayato and Ganyu will freeze enemies, easily letting Ayato do his Normal Attacks on enemies. Venti's on the team for crowd control and because his Elemental Burst syncs great with Ganyu's. Diona will give you shields, heals, and Cryo Resonance.

Ayato will be the ''trigger'' in this Electro-Charged team. Fischl (especially at C6) can help recharge Ayato's energy while Bennett can boost Ayato's damage and heal the party. Beidou or Bennett can be replaced by Yun Jin in this party.

You can replace Kazuha with Yun Jin if you don't have him. This will limit the damage buff to only Ayato's normal attacks.

This Dendro Team Comp for Ayato will only need 2 core teammates, a Pyro and Dendro off-field damage dealer. The goal is to create Dendro Cores by using Ayato and the Dendro Traveler's Elemental Burst. Afterwards, the off-field Pyro unit will trigger the Burgeon reaction with Pyro damage.

Afterwards, you can swap Ayato back in and do damage with his Elemental Skill.

Xiangling will set up Vaporize reactions and Ayato will trigger it. The Geo Traveler will give energy with their C4 talent, increase CRIT Rate with their C1 talent, and create shields for the party. Barbara will support the team with off-field healing.

Use Ayato's Elemental Burst to apply Hydro for Vaporize reactions and buff Yoimiya's Normal Attacks. He can also use his Elemental Skill to trigger Yoimiya's burst. Bennett and Kazuha will buff the party!

Yoimiya can be replaced with Raiden Shogun or by any character who would appreciate the Hydo DMG Ayato provides with his Elemental burst.

C0 is Good Enough for Ayato

Ayato actually has all he needs at 0 constellations! If you have the extra Primos and want to go the extra mile, we recommend getting him to C2 or C4.

How to Use Ayato

Attacking enemies during this stance will create Namisen stacks, which increases damage based on a % of Ayato's current max HP during the skill.

Does Hydro DMG in a Large Area

Casting Ayato's Elemental Skill will deal Hydro DMG in a large area around him. The falling Bloomwater blades have pseudo random targeting, similar to how Ganyu's Elemental Burst works. 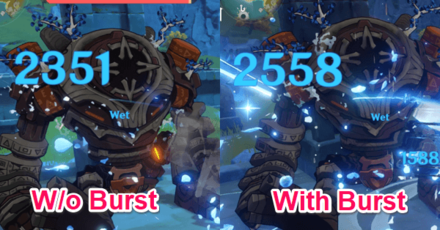 After casting Ayato's Elemental Burst, Normal Attacks of any characters within the field will deal increased DMG. Given how long the burst duration is, it is possible to use it as a Sub-DPS tool if Ayato's Elemental skill is still in cooldown. 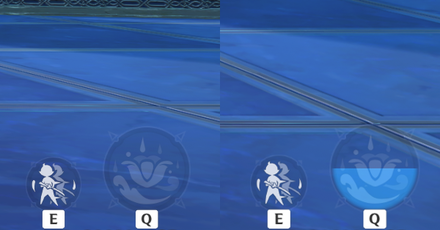 While Ayato is off the field, his passive will provide him with 2 every second if his total energy is below half of his Elemental Burst cost. Ideally, you would only want Ayato to be swapped out when his Elemental Skill is in cooldown, so this passive should give at least 10 Energy at minimum. 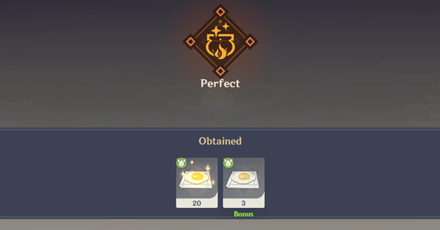 When Ayato cooks a Perfect Dish it has an 18% chance of producing an additional Suspicious Quality dish of the same type!

Kamisato Art: Mine Wo Matoishi Kiyotaki

How to Get Ayato

It was recently announced during the recent livestream for Version 3.3, that Ayato's banner will be up alongside the Raiden Shogun's banner. Both of their banners will run on Version 3.3 Phase 2, starting from December 27, 2022 to January 17, 2022!

Who is Kamisato Ayato? 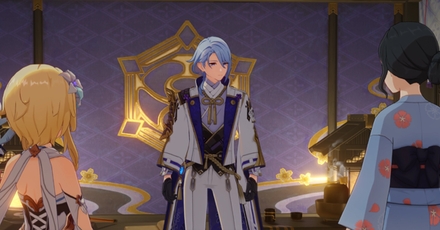 For a better look into the life of Ayato, we recommend checking out our Ayato Lore guide!
Kamisato Ayato Story and Lore

Ayato's Thoughts About Others

See more comments (109 Comments)
Opinions about an article or post

In order for us to make the best articles possible, share your corrections, opinions, and thoughts about 「Ayato Rating and Best Builds | Genshin Impact」 with us!